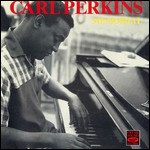 Perkins was born in Indianapolis but worked mainly in Los Angeles. He is best known for his performances with the Curtis Counce Quintet, which also featured Harold Land, Jack Sheldon and drummer Frank Butler. He also performed with the Clifford BrownMax Roach group in 1954, and recorded with Frank Morgan in 1955. Perkins composed the standard "Grooveyard".[1][3]

His playing was influenced by his polio-affected left arm, which he held sideways over the keyboard.[4]

He died of a drug overdose at age 29,[2] having recorded one album, Introducing Carl Perkins, and a short series of singles under his own name. Authors Paul Tanner, Maurice Gerow, and David Megill cite Perkins as one of the best "funky," or hard bop, piano players, but his early death prevented him from leaving a legacy.[5]

This article uses material from the article Carl Perkins (pianist) from the free encyclopedia Wikipedia and it is licensed under the GNU Free Documentation License.

Splanky Jumping Notes Dixieland Band
Update Required To play the media you will need to either update your browser to a recent version or update your Flash plugin.