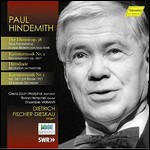 Dietrich Fischer-Dieskau (28 May 1925 – 18 May 2012[1]) was a German lyric baritone and conductor of classical music, one of the most famous Lieder (art song) performers of the post-war period, best known as a singer of Franz Schubert's Lieder, particularly "Winterreise"[2] of which his recordings with accompanist Gerald Moore and Jörg Demus are still critically acclaimed half a century after their release.[3]

Recording an array of repertoire (spanning centuries) as musicologist Alan Blyth asserted, "No singer in our time, or probably any other has managed the range and versatility of repertory achieved by Dietrich Fischer-Dieskau. Opera, Lieder and oratorio in German, Italian or English came alike to him, yet he brought to each a precision and individuality that bespoke his perceptive insights into the idiom at hand." In addition, he recorded in French, Russian, Hebrew, Latin and Hungarian. He was described as "one of the supreme vocal artists of the 20th century"[4] and "the most influential singer of the 20th Century".[5] Fischer-Dieskau was ranked the second greatest singer of the century (after Jussi Björling) by Classic CD (United Kingdom) "Top Singers of the Century" Critics' Poll (June 1999). The French dubbed him "Le miracle Fischer-Dieskau" and Dame Elisabeth Schwarzkopf called him "a born god who has it all."[6] At his peak, he was greatly admired for his interpretive insights and exceptional control of his soft, beautiful instrument. Despite the small size of his lyric/chamber baritone voice, Fischer-Dieskau also performed and recorded a great many operatic roles. He dominated both the opera and concert platform for over thirty years.[7]

Albert Dietrich Fischer was born in 1925 in Berlin to Albert Fischer, a school principal, and Theodora (née Klingelhoffer) Fischer, a teacher. In 1934, his father added the hyphenated "Dieskau" to the family name (through his mother, he was descended from the Kammerherr von Dieskau, for whom Johann Sebastian Bach wrote the "Peasant Cantata"). He started singing as a child and began formal voice lessons at the age of 16. When he was drafted into the Wehrmacht during World War II in 1943, tending horses on the Russian Front, Fischer-Dieskau had just completed his secondary school studies and one semester at the Berlin Conservatory. He was captured in Italy in 1945 and spent two years as an American prisoner of war. During that time, he sang Lieder in POW camps to homesick German soldiers. He had an infirm brother who was sent to an institution by the Nazi regime and starved to death.[8] His family home was also destroyed during the war.[9]

In 1947, Fischer-Dieskau returned to Germany where he launched his professional career as a singer in Badenweiler, singing in Brahms' Ein Deutsches Requiem without any rehearsal. (He was a last-minute substitute for an indisposed singer.) He gave his first Lieder recital in Leipzig in the autumn of 1947 and followed it soon afterwards with a highly successful first concert at Berlin's Titania-Palast.

From early in his career he collaborated with famous lyric sopranos Elisabeth Schwarzkopf and Irmgard Seefried, and the recording producer Walter Legge, issuing instantly successful albums of Lieder by Schubert and Hugo Wolf.

In the autumn of 1948, Fischer-Dieskau was engaged as principal lyric baritone at the Städtische Oper Berlin (Municipal Opera, West Berlin), making his debut as Posa in Verdi's Don Carlos under Ferenc Fricsay. This company, known after 1961 as the Deutsche Oper, would remain his artistic home until his retirement from the operatic stage, in 1978.

Subsequently, Fischer-Dieskau made guest appearances at the opera houses in Vienna and Munich. After 1949 he made concert tours in the Netherlands, Switzerland, France and Italy. In 1951, he made his Salzburg Festival concert debut with Mahler's Lieder eines fahrenden Gesellen (Songs of a Wayfarer) under Wilhelm Furtwängler. That year, he also made his British debut, at the Royal Albert Hall in London during the Festival of Britain. He appeared in Frederick Delius's A Mass of Life, conducted by Sir Thomas Beecham.[10] He made regular opera appearances at the Bayreuth Festival between 1954 and 1961 and at the Salzburg Festival from 1956 until the early 1970s.

As an opera singer, Fischer-Dieskau performed mainly in Berlin and at the Bavarian State Opera in Munich. He also made guest appearances at the Vienna State Opera, at the Royal Opera House, Covent Garden in London, at the Hamburg State Opera, in Japan, and at the King's Theatre in Edinburgh, during the Edinburgh Festival. His first tour in the United States took place in 1955, when he was 29, with his concert debut in Cincinnati on 15 April (J. S. Bach's cantata Ich will den Kreuzstab gerne tragen ) (BWV 56) and 16 April (Ein Deutsches Requiem). His American Lieder debut, singing Franz Schubert songs, took place in Saint Paul, Minnesota, on 19 April. His New York City debut occurred on 2 May at The Town Hall, where he sang Schubert's song cycle Winterreise without an interval. Both American recitals were accompanied by Gerald Moore.

In 1951, Fischer-Dieskau made his first of many recordings of Lieder with Gerald Moore at the EMI Abbey Road Studios, London, including a complete Die schöne Müllerin, and they performed the work on 31 January 1952 at the Kingsway Hall, London in the Mysore Concerts of the Philharmonia Concert Society.[11] They gave recitals together until Moore retired from public performance in 1967. They continued, however, to record together until 1972, in which year they completed their massive project of recording all of the Schubert lieder appropriate for the male voice. Gerald Moore retired completely in 1972, and died in 1987, aged 87. Their recordings of Die schöne Müllerin and Winterreise are highly prized as examples of their artistic partnership.

Fischer-Dieskau also performed many works of contemporary music, including Benjamin Britten (who chose Fischer-Dieskau as the baritone soloist when writing War Requiem), Samuel Barber, Hans Werner Henze, Karl Amadeus Hartmann (who wrote his Gesangsszene for him), Ernst Krenek, Witold Lutosławski, Siegfried Matthus, Othmar Schoeck, Winfried Zillig, Gottfried von Einem and Aribert Reimann. He participated in the 1975 premiere and 1993 recording of Gottfried von Einem's cantata An die Nachgeborenen, written in 1973 as a commission of the UN, both with Julia Hamari and the Wiener Symphoniker conducted by Carlo Maria Giulini.[12]

Beyond his recordings of Lieder and the German opera repertoire, Fischer-Dieskau also recorded performances in the Italian operatic field. His recordings of Verdi's Rigoletto (alongside Renata Scotto and Carlo Bergonzi) and Rodrigo in Verdi's Don Carlos, are probably the most respected of these ventures. (Others, such as the title role in Verdi's Macbeth (with Elena Souliotis), Giorgio Germont in Verdi's La traviata, and Scarpia in Giacomo Puccini's Tosca (with Birgit Nilsson), are not delivered by him with the same degree of effectiveness.) As conductor Ferenc Fricsay put it, "I never dreamed I'd find an Italian baritone in Berlin." Fischer-Dieskau retired from opera in 1978, the year he recorded his final opera, Aribert Reimann's Lear, which the composer had written at his suggestion.

Throughout his career, his musicianship and technique were flawless. As Greg Sandow of Opera News put it, "Overall, his technique is breath-taking; someone should build a monument to it."[13] He retired from the concert hall as of New Year's Day, 1993, at 67, and dedicated himself to conducting, teaching (especially the interpretation of Lieder), painting and writing books. He still performed as a reciter, reading for example the letters of Strauss to Hugo von Hofmannsthal, read by Gert Westphal, for the Rheingau Musik Festival in 1994; and both performing and recording Strauss's melodrama Enoch Arden. He also became an honorary member of the Robert Schumann Society.

As 'the world's greatest Lieder singer' (Time magazine), he regularly sold out concert halls all over the world until his retirement at the end of 1992. The precisely articulated accuracy of his performances, in which text and music were presented as equal partners, established standards that endure today. The current widespread interest in German Romantic art song is mainly due to his efforts. Perhaps most admired as a singer of Schubert Lieder, Fischer-Dieskau had, according to critic Joachim Kaiser, only one really serious competitor – himself, as over the decades he set new standards, explored new territories and expressed unanticipated feelings and emotions.[14]

Few artists achieve the level of recognition, admiration and influence of Fischer-Dieskau, and even fewer live to see that influence realised during their own lifetime. Ushering in the modern recording era, he challenged our perception and processes of how recordings could be made, explored the possibilities of modern recording and exploited the potential for the popularity of classical music – and all this while setting standards of artistic achievement, integrity, risk-taking, and of the aesthetic ideal that became our new norm. Whenever we bask in the beauty of his tone, revere the probing, questioning power of his intellect, or simply wonder at the astonishing physical abilities throughout all that he has achieved in his long recording career, we must also pause and say THANK YOU to this great artist, whose legacy, like a great and bright star lighting the way for those who follow in his passion for singing, is exemplary in every way.—Thomas Hampson, May 2012, Hall of Fame, Gramophone Magazine.

In 1949, Fischer-Dieskau married the cellist Irmgard Poppen. Together they had three sons: Mathias (a stage designer), Martin (a conductor), and Manuel (a cellist). Irmgard died in 1963 of complications following childbirth. Afterwards, Fischer-Dieskau was married to the actress Ruth Leuwerik, from 1965 to 1967, and Kristina Pugell, from 1968 to 1975. In 1977 he married the soprano Júlia Várady.

His older brother Klaus Fischer-Dieskau was a notable Berlin choral director who conducted Fischer-Dieskau several times, including in his only recording of a passion by Heinrich Schütz in 1961.

Fischer-Dieskau smoked during a large part of his career. In an interview with B.Z.-News aus Berlin in 2002 he said, "I quit smoking 20 years ago. I smoked for 35 years, and then stopped in a single day."[18]

This article uses material from the article Dietrich Fischer-Dieskau from the free encyclopedia Wikipedia and it is licensed under the GNU Free Documentation License.

Gin & Tonic Brandy Butler & The Fonxionaires
Update Required To play the media you will need to either update your browser to a recent version or update your Flash plugin.