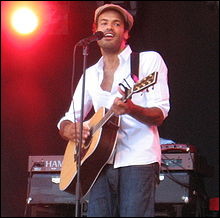 Alain Clark was born in Haarlem, the Netherlands. He went to the Coornhert Lyceum there and also lived in the USA for 3 years to work on his songwriting skills. His first album was released in 2004, written and produced by himself, in Dutch and contained the hitsong "Heerlijk".

As a producer, he worked with Ali B and many others. He produced the debut album of singer Boris. He won the Dutch Zilveren Harp in 2004.

In January 2007, Clark worked on his first album in English. Steve Gadd played drums on Live It Out,[1] an album that went 3 times platinum, with more than 180,000 copies sold. After his success in the Netherlands, Alain Clark released the album in the United Kingdom, and reached the charts in Italy and Switzerland. The album contains hit singles like "This Ain't Gonna Work", which went straight to the Dutch Top 3 and stayed in the Dutch charts for 12 weeks. The album also contains the famous duet "Father and Friend" with his father Dane Clark, the singer of the band Dane and the Dukes of Soul. The song was his biggest chart success. After these two hit singles, "Blow Me Away", a third track reached the Dutch Top 10 as well. In the end of 2007, Alain clark received a Mega Award in the Netherlands. In 2008 he also received a 3FM Award and in 2009 he won the highly respected Edison Music Award.

In 2010 Clark released his album Colorblind a record full of melodic soul, that went gold on its first week of release. It contains the singles "Love Is Everywhere", "Good Days" and a duet with Diane Birch titled "Too Soon to End". The album was released in Italy, Switzerland and Brasil.

Alain Clark returned with Generation Love Revival to the passion of his youth: the groove. Alain says: "At fifteen, I mainly listened to hiphop artists. Like them, I was only interested in rhythm and minimal melody. Those were my roots, that's the way I started making music. On Generation Love Revival I return to that groove-based way of composing. And of course: I use all the experience of the years in between."

This article uses material from the article Alain Clark from the free encyclopedia Wikipedia and it is licensed under the GNU Free Documentation License.

As Time Goes By Bryan Ferry
Update Required To play the media you will need to either update your browser to a recent version or update your Flash plugin.