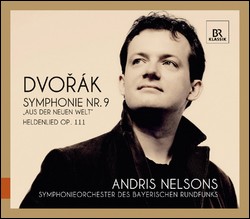 Nelsons was born in Riga. His mother founded the first early music ensemble in Latvia, and his father was a choral conductor, cellist, and teacher.[1] At age five, his mother and stepfather (a choir conductor) took him to a performance of Wagner's Tannhäuser, which Nelsons refers to as a profoundly formative experience: "...it had a hypnotic effect on me. I was overwhelmed by the music. I cried when Tannhäuser died. I still think this was the biggest thing that happened in my childhood."[2]

As a youth, Nelsons studied piano, and took up the trumpet at age 12.[2] He also sang bass-baritone, with a special interest in early music, in his mother's ensemble.[3] He studied for one summer at the Dartington International Summer School with Evelyn Tubb. He served as a trumpeter with the orchestra of the Latvian National Opera.[4]

Nelsons studied conducting with Alexander Titov in Saint Petersburg, Russia and participated in conducting master classes with Neeme Järvi and Jorma Panula. He came to the attention of Mariss Jansons when he emergency-substituted with the Oslo Philharmonic in their trumpet section during an orchestra tour.[4] Nelsons counts Jansons as a mentor, and has been a conducting student with him since 2002.[5]

In 2003, Nelsons became principal conductor of the Latvian National Opera. He concluded his tenure there after four years in 2007.[6] In 2006, Nelsons became chief conductor of the Nordwestdeutsche Philharmonie of Herford, Germany, a post he held until the end of the 2008–2009 season. His first conducting appearance at the Metropolitan Opera was in October 2009 a production of Turandot.[7] In July 2010, Nelsons made his debut at the Bayreuth Festival, conducting a new production of Wagner's Lohengrin at the opening performance of the festival.[8]

In the UK, Nelsons' early work included studio concerts with the BBC Philharmonic in Manchester, and his first BBC Philharmonic concert at the Bridgewater Hall was in November 2007.[9] In October 2007, the City of Birmingham Symphony Orchestra (CBSO) named Nelsons as its 12th principal conductor and music director, effective with the 2008–2009 season, with an initial contract for 3 years. The appointment was unusual in that Nelsons had conducted the CBSO only in a private concert and in a recording session, without a public concert engagement, prior to being named to the post.[5] His first public conducting appearance with the CBSO was on 11 November 2007 in a matinee concert,[10] and his first subscription concert appearance with the CBSO was in March 2008.[11] In July 2009, Nelsons extended his CBSO contract for an additional 3 years, through the 2013–2014 season.[12] In August 2012, the CBSO announced the extension of his CBSO contract formally through the 2014–2015 season, and then for subsequent seasons on the basis of an annual rolling renewal.[13][14] In October 2013, the CBSO announced the conclusion of Nelsons' tenure as music director after the conclusion of the 2014–2015 season.[15][16]

In the US, Nelsons made his first guest-conducting appearance with the Boston Symphony Orchestra (BSO) in March 2011, as an emergency substitute for James Levine at Carnegie Hall.[17] He subsequently guest-conducted the BSO at the Tanglewood Music Festival in July 2012,[18] and made his first appearance with the BSO at Symphony Hall, Boston in January 2013. In May 2013, the BSO named Nelsons as its 15th music director effective the 2014–2015 season. His initial contract was for 5 years and stipulated 8–10 weeks of scheduled appearances in the first year of the contract and 12 weeks in subsequent years.

Nelsons held the title of Music Director Designate in the 2013–2014 season.[19][20] In August 2015, the BSO announced the extension of Nelsons' contract as music director through the 2021–2022 season with a new contract, for 8 years, that replaces the initial 5-year contract, and also contains an evergreen clause for automatic renewal.[21]

Nelsons first guest-conducted the Leipzig Gewandhaus Orchestra in 2011. In September 2015, the orchestra announced the appointment of Nelsons as its 21st Gewandhauskapellmeister effective the 2017–2018 season and with the initial contract for 5 seasons.[22][23]

In December 2016, he returned to the Royal Opera House conducting Rosenkavalier, in a new production directed by Robert Carsen. Nelsons is a regular guest at the Metropolitan Opera New York, the Bayreuther Festspiele and is Artist in Residence at the Konzerthaus Dortmund.

With the CBSO, Nelsons has recorded music of Pyotr Ilyich Tchaikovsky,[24][25] Richard Strauss,[26] and Igor Stravinsky[27] for the Orfeo label. Separately from the CBSO, Nelsons has also recorded for the BR-Klassik label.[28] Nelsons has also recorded commercially with the Boston Symphony Orchestra for Deutsche Grammophon,[29] where their album Under Stalin's Shadow, of the Symphony No 10 of Shostakovich, received a 2015 Grammy award for best orchestral performance.[30] This DG album is part of an intended long-term contract between the Boston Symphony, Nelsons and DG, as extended in May 2016.[31]

This article uses material from the article Andris Nelsons from the free encyclopedia Wikipedia and it is licensed under the GNU Free Documentation License.

New Destinations Journeys
Update Required To play the media you will need to either update your browser to a recent version or update your Flash plugin.