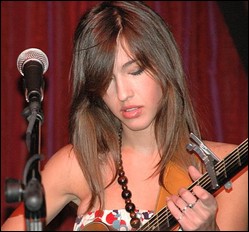 Kate Elizabeth Voegele ( /vo.l/; born December 8, 1986) is an American singer-songwriter and actress. She made her musical debut in 2003, with the release of her The Other Side extended play. She performed numerous local live shows to promote the album, and toured with artists such as John Mayer. In 2005, she released her second extended play, Louder Than Words. Both had local success, and helped raise awareness of Voegele as an artist. During this time period, Voegele performed at events such as Farm Aid to promote her music, and began posting her music on popular social media network MySpace. She also won numerous awards and honors for her songwriting abilities.

Voegele officially signed with Interscope Records in 2006, and immediately began working on her official debut album. Her first studio album, Don't Look Away, was released in 2007 to generally positive reviews. The album became her first to chart on the Billboard 200, and was re-released numerous times since its release. It spawned two singles, one of which charted on the Billboard Hot 100 and the UK Singles Chart. While promoting this album, Voegele began appearing as Mia Catalano in the television series One Tree Hill. This made her acting debut, and helped promote her music. She would remain a recurring cast member for four seasons, lasting until 2011.

Voegele released her second studio album, A Fine Mess in 2009. The album debuted at number 10 on the Billboard 200. It spawned one single, "99 Times", which became her most successful radio single in the US to date. Numerous promotional singles were released to promote the album, some of which had commercial success. In 2011, Voegele released her third studio album, Gravity Happens. This was her first album to be released through ATO Records . The album debuted and peaking at number 53 on the Billboard 200. She has since revealed she is working on her fourth studio album, slated for a 2013 release.

Kate Elizabeth Voegele was born in the Cleveland suburb of Bay Village, Ohio[1] on December 8, 1986. Voegele has a younger sister named Courtney.[2] She is of English, French, Irish, Scottish, Italian, and German descent.[3][4] Voegele graduated from Bay High School in 2005.[5]

Voegele made her musical debut in 2003, while Voegele was only 16 years old, when she recorded and released her debut extended play, The Other Side.[6] The song "Top of the World" received local radio airplay, and songs from the album were performed locally by Voegele at numerous venues.[7] That same year, Voegele performed alongside John Mayer and Counting Crows.[8] In 2004, it was revealed that Voegele would be a performer at the 2004 Farm Aid concert,[9][10] alongside artists such as Willie Nelson and Neil Young.[11] Voegele's songs began being used in popular media as well around this time. Her song "Only Fooling Myself" was featured in series' such as Clubhouse and The Ghost Whisperer.[12] Her song "It's Only Life" was featured in the MTV series Newport Harbor: The Real Orange County.[13]

In 2005, Voegele released her second extended play, Louder Than Words.[14] The extended play, as well as her previous one, helped further draw interest in Voegele as an artist.[15] The album featured songs from her first album, as well as a new song titled "Better Days." That same year, Voegele's song "Only Fooling Myself" won the Pop category of the 2005 USA Songwriting Contest,[16] the youngest artist ever to win the honor in any category.[17][18] In 2006, her song "I Won't Disagree" was a winner of the New York City Songwriters Circle.[19] Her song "Only Fooling Myself" also won praise at the 2006 USA Songwriting Competition at Borders Books & Music in Austin, Texas.[20]

In 2006, Voegele received a message on popular social media website MySpace from the owner, Tom Anderson.[21] Anderson asked if Voegele was signed, and later asked her to meet him.[22] She later signed with MySpace Records, a branch of Interscope Records.[22] On the event, Voegele stated " I thought it was a fake message. I mean does Tom really even exist, let alone go on MySpace and send messages to random people? But sure enough, it was totally legitimate, and the next week I was out in LA meeting and showcasing for him. [...] I was so excited because from the start I knew MySpace Records was different than other labels I'd been to. I felt immediately comfortable and I could tell I would be given a lot of artistic freedom there."[23]

The same day that Voegele made her appearance on One Tree Hill, her debut album was re-released featuring a new cover art[37] and three new acoustic songs.[38] In April 2008, Voegele released her official debut single, "Only Fooling Myself."[39] The song's music video was released in May 2008, and featured Voegele singing as the background changes to various different locations.[40] The single peaked a #37 on the Hot Adult Top 40 Tracks chart in the US,[41][42] which is based on radio airplay.[43] In September of the same year, Voegele released her second official single, a cover of the Leonard Cohen song "Hallelujah".[44] Voegele's version of the song became her first single to chart on the Billboard Hot 100 chart in the US, where it debuted and peaked at number 68 on the chart.[45][46] I[47] This made it the first time any version of the song had charted on the Hot 100,[48] and remained the only time the song had made the chart until Justin Timberlake and Matt Morris released their version in 2010.[49] The success of the singles also helped boost sales of Don't Look Away. The album eventually climbed the Billboard 200 to achieve a peak of 27, making it her second highest charting album to date.[50][51] Don't Look Away has sold an estimated 237,000 copies as of 2009.[52]

The success of Voegele's debut album later led to her appearing on numerous compilation albums that year as well. She recorded a cover of the song "When You Wish Upon a Star" for the compilation album DisneyMania 6.[53] Her song "It's Only Life" was featured on the soundtrack for the ABC Family series Kyle XY.[54] Her song "Lift Me Up" was later featured on the AT&T Team USA Soundtrack.[55] Voegele's songs "Devil In Me" and "You Can't Break a Broken Heart" are featured on the Music From One Tree Hill soundtrack, released in 2008.

It was revealed in 2008 that Voegele would be returning for the sixth season of One Tree Hill that same year.[56] While touring to promote her previous album, she began writing material for her second studio album.[57] While working on her second studio album, Voegele's One Tree Hill character was also working on her album.[58] Voegele's second studio album, A Fine Mess, was released on May 18, 2009.[59][60][61] The album debuted at number 10 on the Billboard 200,[62][63] with first week sales of 37,000 copies.[64][65] This made it the highest first week sales for one of Voegele's albums, and her highest peaking album to date. By September of that same year, the album had sold an estimated 157,000 copies worldwide.[66] One official single, "99 Times", was released from the album on April 14, 2009.[67] The single went on to become her most successful single in terms of radio airplay, peaking at number 22 on the Hot Adult Top 40 Tracks chart in the US.[68] This made it her second and highest entry on the chart.[69] It also peaked at number 8 on the Bubbling Under Hot 100 chart.[70] Voegele returned for the seventh season of One Tree Hill in 2009, making it the third season to feature Voegele's character.[71][72] Voegele later returned for the eighth season of the series as well, and recorded a version of the show's theme song.[73] She continued to play music on the series throughout her appearance.[74] Voegele did not return for the ninth and final season.

Voegele has confirmed that she is working on her fourth studio album, which she hopes to release in 2013.[75]

This article uses material from the article Kate Voegele from the free encyclopedia Wikipedia and it is licensed under the GNU Free Documentation License.

Holding On Gregory Porter
Update Required To play the media you will need to either update your browser to a recent version or update your Flash plugin.