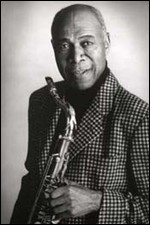 William Marcel "Buddy" Collette (August 6, 1921 – September 19, 2010) was an American jazz flautist, saxophonist, and clarinetist. He was a founding member of the Chico Hamilton Quintet.

William Marcel Collette was born in Los Angeles on August 6, 1921. He was raised in Watts, surrounded by people of all different ethnicities. He lived in a house built by his father in an area with cheap, plentiful land. The neighborhood in which he grew up was called Central Gardens area. For elementary school, he attended Ninety-sixth Street School because it allowed black students. Other schools in the area, such as South Gate Junior High School, did not and Collette often felt odd entering areas primarily inhabited by whites. Collette’s family did not have a lot of money, but his childhood gave him the chance to mix with all sorts of different people. The “melting pot” of Watts framed the way he saw his position as a black man in the future.

Buddy Collette began playing piano at age ten, at his grandmother’s request. His love for music came not only from his community, but from his parents—his father played piano and his mother sang. In middle school, he began playing the saxophone. That same year, he formed his first band with Charlie Martin, Vernon Slater, Crosby Lewis, and Minor Robinson. They played the music of Dootsie Williams, which Collette’s parents had received while at a party. The following year, Collette started a band with Ralph Bledsoe and Raleigh Bledsoe. Together they played for less than a dollar each at parties put on by people in the area on Saturday nights. Following this, Collette started a third group which eventually included Charles Mingus on bass. Collette and Mingus became very good friends and Collette helped Mingus find his less wild, more reserved side.

During his childhood, Collette had plenty of musicians to look up to. William Jr., Coney, Britt, and George Woodman were the sons of trombonist, William Woodman. Their ability to play gigs and make money while still in high school was inspiring to musicians like Collette, who were a few years younger. When he was fifteen, Collette became a part of the Woodman brothers’ band, along with Joe Comfort, George Reed, and Jessie Sailes. Collette credits the Woodman brothers with finding the jazz sound of Watts.

During his first couple years of high school, Collette began traveling to Los Angeles in order to form connections with other musicians. At the Million Dollar Theatre, he and his band competed in a battle of the bands, but lost to a band that included Jackie Kelson, Chico Hamilton, and Al Adams. Afterwards, Collette was asked to join the winning band, making twenty-one dollars per week. Later, Charles Mingus joined this band.

At the age of 19, Collette started taking musical lessons from Lloyd Reese, who also taught Eric Dolphy, Charles Mingus, and many others. Collette credits Reese with teaching him and the other musicians how to manage themselves in the music world.

After serving as a U.S. Navy band leader, he played with the Stars of Swing (Woodman, Mingus, and Lucky Thompson), Louis Jordan, and Benny Carter.[3]

In 1949, he was the only black member of the band for You Bet Your Life, a TV and radio show hosted by Groucho Marx. In the 1950s, he worked as a studio musician with Frank Sinatra, Ella Fitzgerald, Duke Ellington, Count Basie, Nat King Cole, and Nelson Riddle.

Although information on the relationship between Groucho Marx and Buddy Collette is scarce, there is no doubt that their relationship was significant. Marx, an American Jewish entertainer was, by the 1940s, one of the film industry’s biggest superstars thanks to films such as “Duck Soup” and “A Night at the Opera.” Marx’s career successes, up to You Bet Your Life, had been shared with his brothers, who, as the Marx Brothers, had been entertaining the public since their childhood days in Vaudeville.

In 1949, Collette was the first black musician to be hired by a nationally broadcast TV studio orchestra, on You Bet Your Life, hosted by Groucho. It has been noted that the conductor of the orchestra, Jerry Fielding, received hate-mail for standing by Collette. Collette’s job and job security on the popular television show signaled that opportunities were becoming more readily available for black musicians by the 1950s.

Rising in success in the late 1940s, Buddy Collette was called upon frequently for collaborations and recordings on alto saxophone with musicians such as Ivie Anderson, Johnny Otis, Gerald Wilson, Ernie Andrews, and Charles Mingus. Most notably, Collette and Mingus formed their first band in 1933, the driving force that convinced Mingus to switch from cello to bass. The counterpoint between these this unlikely instrumental pairing blossomed into a lifelong friendship. He went on to form a short-lived yet cooperative band in 1946 with Mingus called Stars of the Swing, which also included trombonist Britt Woodman, trumpeter John Anderson, tenor saxophonist Lucky Thompson (replaced by Teddy Edwards early on), pianist Spaulding Givins (later known as Nadi Qamar), and drummer Oscar Bradley.

Around the early 1900s, Los Angeles was primarily divided into two music unions: Local 47, a union for white musicians, and Local 767, a union for black musicians.[1] Buddy Collette and several other black musicians including Bill Green, Charles Mingus, Britt Woodman Milt Holland made concentrated efforts to merge the two unions to one, color-blind union in the early 1950s.[1] Initially, the merge existed as an interracial symphony performing at the Humanist Hall on Twenty-third and Union.[1] This group received a great deal of publicity as iconic figures such as “Sweets” Edison, Nat King Cole, and Frank Sinatra provided public support of the interracial group.[1] The success of this group led to the coalition of the two segregated locals.

Buddy Collette eventually made the board of Local 767 along with Bill Douglass in the vice-president’s position.[1] After three years of working with Leo Davis and James Petrillo, the presidents of Local 767 and Local 47 respectively, the two groups became what Collette calls an “amalgamation” of the two in 1953.[1] This merging signified greater opportunity for these musicians in both careers and insurance benefits, as well as great racial advancement. Up to forty locals have since replicated this success elsewhere, which has allowed the talent of a musician as opposed to his/her race determine success.[1]

Association with the Chico Hamilton Quintet

In 1955, Buddy Collette became a founding member of the unusually instrumented chamber jazz quintet, led by percussionist Chico Hamilton.The quintet was notable for having cellist and pianist (Fred Katz) as the band’s centerpiece, leading Collette to refer to Katz as “the first jazz cello player”.[2] Also included in the quintet was guitarist Jim Hall and bassist Jim Aton, later replaced by Carson Smith. The group gained national prominence and became one of the most influential West Coast jazz bands, synonymous with the laidback “cool jazz” of the 1950s.[3] In the quintet, Collette played the reeds (tenor and alto saxophones, the flute and clarinet).[2]

In 1957, the group (accompanied by flutist Paul Horn and guitarist John Pisano) made a cameo appearance in the Burt Lancaster-Tony Curtis film, “Sweet Smell of Success”.[4] Later that year, Collette collaborated with Horn in his own flutist ensemble, the "Swinging Shepherds", a four-flute-lineup.[5] In 1960, the quintet also gave a significant performance in the Newport Jazz Festival documentary "Jazz on a Summer’s Day”, alongside flutist Eric Dolphy.[4] Later, in 1996, when the Library of Congress commissioned Collette to write and perform a special big-band concert to highlight his long career, he brought together some old musical collaborators to perform with him, including Chico Hamilton.[2]

Buddy Collette’s career as a musician produced not only an ample discography, but created and transformed numerous musicians. Collette dedicated a large portion of his career to teaching and mentoring others and helping younger artists that were once in his footsteps, into professional and highly skilled artists. Collette’s mentees included Eric Dolphy, Frank Morgan, and James Newton. Collette initially taught and mentored within the Watts district of Los Angeles, but later began traveling and performing around the country.Towards the later half of his career, Collette was in a high demand to teach seminars and music clinics in universities around the country, in addition to being asked to perform and take part in jam sessions. One of his most notable affiliations is with the UCLA oral history program, where he was a key contributor to the Central Avenue Sounds program ran by Stephen Isoardi. Collette also joined the faculty at California State University, Pomona campus in 1992 where he was a conductor of the jazz and combo band. Collette also held important faculty positions at CSULA, CSULB, California State University Dominguez Hills, and Loyola Marymount University.

Collette’s legacy lives on through the various careers that he helped transform. Through his work with the conjunction of the music unions, as a host of regular jam sessions, and as an organizer for the multi-racial community Humanist Symphony Orchestra, Collette helped countless of musicians find their signature sounds and perfect their skills. Buddy Collette’s career and accomplishments were rewarded by the Los Angeles Jazz Society where he received a special commendation, and with the Lifetime Achievement Award from the American Federation of Musicians. Local 47, for his musical contributions spanning four decades. Collette’s legacy lives on through the JazzAmerica program, a non-profit organization which he co-founded in 1994 that aims at bringing jazz into classrooms in middle school and high schools in the greater Los Angeles area tuition-free.

With Miles Davis and Michel Legrand

With Gábor Szabó and Bob Thiele

This article uses material from the article Buddy Collette from the free encyclopedia Wikipedia and it is licensed under the GNU Free Documentation License.