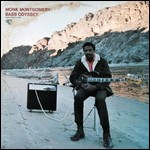 Born in Indianapolis, Indiana, Montgomery was the older brother of guitarist Wes Montgomery; younger brother, Buddy Montgomery played vibraphone and piano. The brothers released a number of albums together as the Montgomery Brothers.[1] He also had an older brother, Thomas (died at 16), who played drums, and a younger sister, Ervena (Lena), who plays piano.

He is perhaps the first electric bassist of significance to jazz, introducing the Fender Precision Bass to the genre in 1951, although he was most famously seen playing the later Fender Jazz Bass, which became his signature instrument. Montgomery also played the double bass. His professional career did not start until after his younger brother Wes, at the age of 30. From 1951 to 1953 he worked in Lionel Hampton's Orchestra. After that he worked with his brothers and Alonzo Johnson in the Montgomery Johnson Quintet. In 1955 he moved to Seattle to form the Mastersounds from 1957 to 1960. Later, from 1966 to 1970, he freelanced with Cal Tjader and continued to play where he settled in Las Vegas, Nevada, with The Red Norvo Trio. In his final years he was active in the Las Vegas Jazz Society, which he founded. He had also been planning a world jazz festival.

Montgomery died of cancer in Las Vegas on May 20, 1982. He had a wife, Amelia, three sons, and four stepchildren.

This article uses material from the article Monk Montgomery from the free encyclopedia Wikipedia and it is licensed under the GNU Free Documentation License.

Rantanplan's Romance Chachaloca
Update Required To play the media you will need to either update your browser to a recent version or update your Flash plugin.