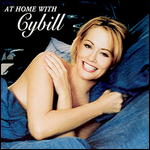 Shepherd was born in Memphis, Tennessee, the daughter of Patty (née Shobe), a homemaker, and William Jennings Shepherd, who managed a home appliance business.[1] Cybill was named using an acronym that referred to her grandfather Cy and her father Bill. Shepherd won the 1966 "Miss Teenage Memphis" contest at age 16 and the 1968 "Model of the Year" contest at age 18, making her a fashion star of the 1960s and resulting in fashion model assignments through high school and afterward.[2]

According to Shepherd's autobiography, a 1970 Glamour magazine cover caught the eye of film director Peter Bogdanovich. His then-wife, Polly Platt, claimed that when she saw the cover in a check-out line in a Ralphs grocery store in southern California, she said "That's Jacy",[3] referring to the role Bogdanovich was casting—and ultimately given to Shepherd—in The Last Picture Show (1971). She became intimately involved with him, as well as co-star Jeff Bridges, screenwriter Larry McMurtry, and then location manager Frank Marshall.[4]

Her first film was The Last Picture Show, also starring Jeff Bridges and Timothy Bottoms. The film became a critical and box office hit, earning several Academy Awards and nominations. Shepherd was nominated for a Golden Globe. Shepherd was cast opposite Charles Grodin in The Heartbreak Kid (1972). She played Kelly, the beautiful, sun-kissed young woman for whom Grodin's character falls while on his honeymoon in Miami. Directed by Elaine May, it was another critical and box office hit.[5] Also in 1972, Shepherd posed as a Kodak Girl for the camera manufacturer's then-ubiquitous cardboard displays.[6]

In 1974, Shepherd again teamed with Peter Bogdanovich for the title role in Daisy Miller, based on the Henry James novella. The film—a period piece set in Europe—proved to be a box office failure. That same year, she launched a singing career, releasing her debut studio album Cybill Does It...To Cole Porter for MCA Records[7] The following year, she made her next film, At Long Last Love (1975), a musical which was once again directed by Bogdanovich, but like Daisy Miller, it also flopped.

Shepherd returned with good reviews for her work in Martin Scorsese's Taxi Driver (1976). According to Shepherd, Scorsese had requested a "Cybill Shepherd type" for the role. She portrayed an ethereal beauty with whom Robert De Niro's character, Travis Bickle, becomes enthralled.

A series of less successful roles followed, including The Lady Vanishes, the remake of Alfred Hitchcock's 1938 film of the same name. Already sitting in on an acting class taught by Stella Adler, Shepherd was offered work at a dinner theater in Norfolk, VA, and turned to friend Orson Welles for advice. He encouraged her to get experience on stage in front of an audience, anywhere but New York or Los Angeles[8] away from the harsh big-city critics[9] and so she moved back to her home town of Memphis to work in regional theatre.[10]

In 1982, Shepherd returned to New York and took to the stage soon after, when she played alongside James MacArthur in a theatre tour of Lunch Hour, by Jean Kerr.[11] The following year, Shepherd went back to Los Angeles and soon won the role of Colleen Champion in the night-time drama, The Yellow Rose (1983), opposite Sam Elliott. Although critically acclaimed, the series lasted only one season. A year later, Shepherd was cast as Maddie Hayes on ABC's Moonlighting (1985–1989), which became the role that defined her career. The producers knew that her role depended on having chemistry with her co-star, and she was involved in the selection of Bruce Willis. A lighthearted combination of mystery and comedy, the series won Shepherd two Golden Globe awards.[12]

She starred in Chances Are (1989) with Robert Downey Jr. and Ryan O'Neal, receiving excellent reviews. She then reprised her role as Jacy in Texasville (1990), the sequel to The Last Picture Show (1971), as the original cast (including director Peter Bogdanovich) reunited 20 years after filming the original. She also appeared in Woody Allen's Alice (1990), and Eugene Levy's Once Upon a Crime (1992), as well as several television films. In 1997, she won her third Golden Globe award[12] for CBS' Cybill (1995–1998), a television sitcom, in which the title character, Cybill Sheridan, an actress struggling with hammy roles in B movies and bad soap operas, was loosely modeled on herself (including portrayals of her two ex-husbands).

In 2000, Shepherd's bestselling autobiography was published, titled Cybill Disobedience: How I Survived Beauty Pageants, Elvis, Sex, Bruce Willis, Lies, Marriage, Motherhood, Hollywood, and the Irrepressible Urge to Say What I Think, written in collaboration with Aimee Lee Ball.[13] That same year, Shepherd hosted a short-lived syndicated talk show version of the book Men Are from Mars, Women Are from Venus, but left the show in early 2001 and was replaced by Cristina Ferrare, Bo Griffin, Sam Phillips, Drew Pinsky, and Rondell Sheridan. In 2003, she guest-starred on 8 Simple Rules as the sister of Cate Hennessy (portrayed by Katey Sagal). She has played Martha Stewart in two television films: Martha, Inc.: The Story of Martha Stewart (2003) and Martha: Behind Bars (2005).

From 2007 until it ended, Shepherd appeared on the Showtime drama, The L Word as the character Phyllis Kroll for the show's final three seasons. In 2008 she joined the cast of the USA Network television series Psych as Shawn Spencer's mother, Madeleine Spencer. On November 7, 2008, Shepherd guest-starred in a February episode of the CBS drama Criminal Minds.[14] In the fall of 2010 Shepherd appeared in an episode of ABC's new show, No Ordinary Family.[15] and in November of the same year she guest-starred in an episode of CBS' $h*! My Dad Says.[16]

Shepherd appeared alongside Jennifer Love Hewitt in the 2010 television film The Client List and then in the 2012-13 series based on the film.

In July 2012, Shepherd made her Broadway debut in the revival of Gore Vidal's The Best Man at the Gerald Schoenfeld Theatre alongside James Earl Jones, John Stamos, John Larroquette, Kristin Davis and Elizabeth Ashley to positive reviews.[17][18][19]

Shepherd appeared in Do You Believe? (2015), a Christian-themed movie produced by Pure Flix Entertainment, the same studio that produced God's Not Dead. She played a mother grieving the death of her daughter.[20]

Throughout her career, Shepherd has been an outspoken activist for issues such as gay rights[21] and abortion rights.[22][23] In 2009, she was honored by the Human Rights Campaign in Atlanta to accept one of two National Ally for Equality awards.[24] She has been an advocate for same-sex marriage.[25]

She was present at the opening of the National Civil Rights Museum in her hometown of Memphis, for which she lent some financial support.[26]

In her autobiography,[27] Shepherd revealed that she called her mother in 1978, crying and unhappy with the way her life and career were going. Her mother replied, "Cybill, come home." Shepherd went home to Memphis, where she met and began dating David M. Ford, a local auto parts dealer and nightclub entertainer. She became pregnant and the couple married that year. Their daughter, Clementine Ford, was born in 1979. The marriage ended in divorce in 1982.

In 1987, Shepherd became pregnant by chiropractor Bruce Oppenheim and married him, giving birth to twins, Cyrus Zachariah and Molly Ariel Shepherd-Oppenheim[1] during the fourth season of Moonlighting. The couple divorced in 1990.

Shepherd has previously described herself as "a goddess-worshipping Christian pagan Buddhist"; also known as a matriarchal religion.[31]

In October 2014, as part of the publicity for the then upcoming Christian-themed film, Do You Believe?, in which she would be starring, Cybill revealed that she had returned to her Christian faith, saying: "I was born a Christian, sang in the choir. Then I lost touch with my saviour Jesus Christ. I stopped talking to Him and praying. Then I just started talking to Jesus and I started to feel really good and I got the offer to do this film."[20]

Shepherd made the following claims in her autobiography:[27]

In her autobiography,[27] Shepherd addressed rumors that she was jealous of her co-stars Bruce Willis and Christine Baranski for winning Emmy awards while she has not: "The grain of truth in this controversy was that of course I was envious. Who doesn't want to win an Emmy?"

This article uses material from the article Cybill Shepherd from the free encyclopedia Wikipedia and it is licensed under the GNU Free Documentation License.