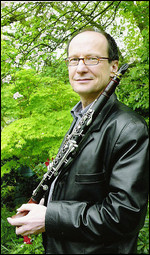 James Campbell (b. Leduc, Alberta, near Edmonton, 10 August 1949) is a Canadian/American clarinetist. James Campbell has followed his muse to five television specials, more than 40 recordings, over 30 works commissioned, a Juno Award (Stolen Gems), a Roy Thomson Hall Award, Canada's Artist of the Year and the Order of Canada. Most recently, Campbell received The Queen's Golden Jubilee

Called by the Toronto Star Canadas pre-eminent clarinetist and wind soloist, James Campbell has performed solo and chamber music concerts in 30 countries, has been soloist with over 60 orchestras, including the Boston Pops, the London Symphony, the Russian Philharmonic, and the Montreal Symphony and has performed Coplands Clarinet Concerto four times with Aaron Copland conducting. He has appeared with over 30 string quartets, including the Amadeus (when he replaced an ailing Benny Goodman on a tour of California), Guarneri, Vermeer, New Zealand, Fine Arts, Allegri and St Lawrence Quartets.

More than 30 works have been written for James Campbell, including works by James Macmillan (Scotland) Jacques Hetu (Canada), David Baker (US), George Shearing (UK/US), Wilhem Jetts (Holland), and Keiko Harada (Japan). Dreaming of the Masters, a jazz concerto by Allan Gilliland, and commissioned by the Edmonton Symphony, received its premieres with the Edmonton Symphony (Canada) and the Boston Pops (US). Gilliland also arranged Leonard Bernsteins West Side Story for Campbell (premiered with the Kitchener Waterloo Symphony Orchestra).

Coming off his 26th season as Artistic Director of Festival of the Sound, during 2010-2011 James will team up with other musicians for exciting collaborations that embody classical, jazz and the unknown......

Since 1989 Campbell has been teaching clarinet at the prestigious Indiana University Jacobs School of Music.

Of Campbell's extensive discography many have won international acclaim. Most recent releases include the Brahms Clarinet Quintet with the Allegri Quartet, voted "Top Choice" by BBC Radio 3, the world premiere recording of Brahms [orchestrated Berio Sonata Op. 120 No. 1 with the London Symphony Orchestra (both on Cala Records); and the Sony Classical re-release of the Debussy Premier Rhapsody with Glenn Gould.

Campbell is the subject of numerous features and cover stories in Clarinet Magazine (US), Clarinet and Sax (UK), Piper Magazine (Japan), Gramophone, and in the book Clarinet Virtuosi of Today, by British author and clarinet authority Pamela Weston. In 1984, James Campbell was named Artistic Director of the annual summer chamber music festival in Parry Sound, ON, the Festival of the Sound. Mr. Campbell has taken the Festival to England on three occasions and it has been the subject of documentaries by BBC Television, CBC Television and TV Ontario.

The Canadian Music Council named him artist of the year in 1989, and he was appointed a Member of the Order of Canada in 1997.

This article uses material from the article James Campbell (clarinetist) from the free encyclopedia Wikipedia and it is licensed under the GNU Free Documentation License.

Lester Leaps In Swiss Swing Orchestra
Update Required To play the media you will need to either update your browser to a recent version or update your Flash plugin.