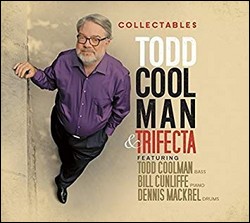 Todd Coolman (born July 14, 1954) is a jazz bassist residing near New York City. Since moving to New York in 1978, he has performed with Horace Silver, Gerry Mulligan, Art Farmer, Lionel Hampton and Benny Goodman. Coolman released Lexicon in 1995 and "Perfect Strangers" in 2008. In 1999, Coolman won the Grammy Award for Best Album Notes for Miles Davis Quintet 1965-1968.

Todd Coolman is currently Professor of Music and Director of the Jazz Studies Program in the Conservatory of Music at Purchase College. Coolman received his Ph.D. in music from New York University.

This article uses material from the article Todd Coolman from the free encyclopedia Wikipedia and it is licensed under the GNU Free Documentation License.

Crazy Poffet Trio
Update Required To play the media you will need to either update your browser to a recent version or update your Flash plugin.