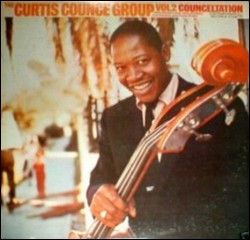 Counce was born in Kansas City, Missouri and moved to California in 1945. He began recording in 1946 with Lester Young, and in the 1950s in Los Angeles with musicians such as Shorty Rogers, Stan Kenton, [1]Shelly Manne, Lyle Murphy, Teddy Charles, and Clifford Brown.[2] Counce formed his quintet in 1956 featuring tenor saxophonist Harold Land, trumpeter Jack Sheldon, pianist Carl Perkins and drummer Frank Butler. Elmo Hope replaced Perkins after his death at age 29 in 1958.[3] Gerald Wilson replaced Sheldon on some recordings.[3] The four albums originally released on Contemporary Records were reissued in 2006 on a double CD by Gambit Spain. Counce died in Los Angeles, California, of a heart attack.

This article uses material from the article Curtis Counce from the free encyclopedia Wikipedia and it is licensed under the GNU Free Documentation License.

Here, There And Everywhere Walter Lang Trio
Update Required To play the media you will need to either update your browser to a recent version or update your Flash plugin.