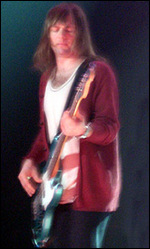 Madden was born in Austin, Texas. He began playing in junior high school at the Brentwood School in Los Angeles, playing in garages along with friends Jesse Carmichael (guitar/vocals) and Adam Levine (vocals/guitar). The bands Pearl Jam and Nirvana were among their influences. In 1994, with the addition of Ryan Dusick (drums), the band Kara's Flowers was formed.[2]

After the break-up of Kara's Flowers, Madden attended classes at UCLA. After Madden attended college, the group reformed with guitarist James Valentine joining the line-up, and Jesse Carmichael mainly playing the keyboards, and pursued a new musical direction, changing their name to Maroon 5. Throughout their career, the band has released six studio albums: Songs About Jane (2002), It Won't Be Soon Before Long (2007), Hands All Over (2010), Overexposed (2012), V (2014) and Red Pill Blues (2017).

Madden was a dedicated vegan for several years[3] and supports Farm Sanctuary.

This article uses material from the article Mickey Madden from the free encyclopedia Wikipedia and it is licensed under the GNU Free Documentation License.

The Preacher Raymond Droz Sextett
Update Required To play the media you will need to either update your browser to a recent version or update your Flash plugin.