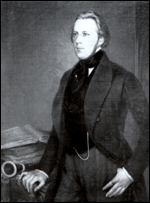 Heinrich Joseph Baermann (also spelled Bärmann) (February 14, 1784, Potsdam, Germany – June 11, 1847, Munich, Germany) was a clarinet virtuoso of the Romantic era who is generally considered as being not only an outstanding performer of his time, but highly influential in the creation of several composers' compositions.

In his youth, Baermann took lessons from Joseph Beer (1744-1811) at the military school in Potsdam. After his skill came to the attention of the Berlin court in 1804, Prince Louis Ferdinand of Prussia had the 20 year old musician pursue his training in Berlin under the guidance of Franz Tausch (1762-1817). He was employed in the court orchestra of Munich from 1807 until his retirement in 1834 when his son Carl Baermann succeeded him.

Parallel to Baermann's rise, the clarinet was undergoing a series of developments in key construction and embouchure that allowed greater agility and flexibility in playing. It was becoming custom to now play with the reed on the bottom lip, as is done today, as opposed to the top lip as had been the previous prevailing style. Baermann was an exponent of this new style of playing, and possessed a modern instrument made by Griesling and Schlott which allowed him to play chromatic passages with far greater ease than traditional 5 keyed instruments. He is said to have had a great dynamic range.[1]

Numerous composers wrote for Baermann, and he undoubtedly influenced the romantic clarinet repertoire. Along with lesser well known composers such as Franz Danzi and Peter von Lindpaintner, Baermann received works from Felix Mendelssohn, Carl Maria von Weber and Giacomo Meyerbeer. Mendelssohn most notably wrote the two Konzert Stücke, Opp. 113, 114 (Concert Pieces) for Baermann and his son Carl to play together; Meyerbeer wrote a quintet (1812) and concertos, and Weber produced numerous works including two concertos (Opp. 73, 74), a quintet (Op. 34), the Concertino, Op. 26, and the Sylvana Variations, Op. 33, but not his Grand Duo Concertant.[2]

Not unlike other virtuosi at the time, Baermann tried his hand fairly successfully at composing for his instrument as can be heard on the recording by Dieter Klöcker on the Orfeo music label. Among other works, he wrote an Adagio for Clarinet and Strings in D-flat, which was long misattributed to Richard Wagner.

Recordings of his compositions

This article uses material from the article Heinrich Baermann from the free encyclopedia Wikipedia and it is licensed under the GNU Free Documentation License.