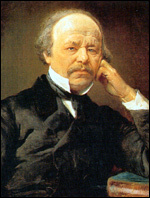 Dargomyzhsky was born in Troitsko village, Belyovsky District, Tula Governorate, and educated in Saint Petersburg. He was already known as a talented musical amateur when in 1833 he met Mikhail Glinka and was encouraged to devote himself to composition. His opera Esmeralda (libretto by composer, based on Victor Hugo's The Hunchback of Notre Dame) was composed in 1839 (performed 1847), and his Rusalka was performed in 1856; but he had little success or recognition either at home or abroad, except in Belgium, until the 1860s, when he became the elder statesman, but not a member, of The Five.

His last opera, The Stone Guest, is his most famous work, known as a pioneering effort in melodic recitative. With the orchestration and the end of the first scene left incomplete at his death, it was finished by César Cui and Nikolai Rimsky-Korsakov, and was much prized by The Five for what was perceived as its progressive approach to operatic expression. It was premiered in 1872, but never became a lasting standard operatic repertoire item.

Dargomyzhsky also left some unfinished opera projects, among them an attempted setting of Pushkin's Poltava, from which a duet survives. Besides operas, his other compositions include numerous songs, piano pieces, and some orchestral works.

This article uses material from the article Alexander Dargomyzhsky from the free encyclopedia Wikipedia and it is licensed under the GNU Free Documentation License.