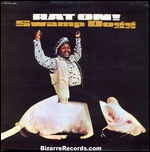 Jerry Williams, Jr. (born 12 July 1942) is an American soul music artist who is better known by his pseudonym Swamp Dogg.

In 1970 he took on the persona of "Swamp Dogg" and released his first LP record, Total Destruction to Your Mind, which was reissued on March 5, 2013 by Alive Naturalsound Records.[1] The cover of his 1971 album, Rat On!, featuring Williams on the back of an oversized white rat, was ranked as one of the worst album covers of all time.[2]

Williams is also a noted songwriter and record producer. In an interview on NPR's Studio 360, Williams stated he was raised on country music: "Black music didn't start 'til 10 at night until 4 in the morning and I was in bed by then.. . . If you strip my tracks, take away all the horns and guitar licks, what you have is a country song."[3]

This article uses material from the article Swamp Dogg from the free encyclopedia Wikipedia and it is licensed under the GNU Free Documentation License.

This one is for Bruno Stewy von Wattenwyl Trio
Update Required To play the media you will need to either update your browser to a recent version or update your Flash plugin.