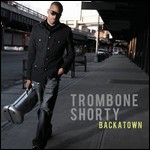 Troy Andrews (born January 2, 1986), also known by the stage name Trombone Shorty, is a trombone and trumpet player from New Orleans, Louisiana, United States. He has worked in jazz, funk and rap music. Andrews is the younger brother of trumpeter and bandleader James Andrews as well as the grandson of singer and songwriter Jessie Hill. Andrews began playing trombone at age six, and since 2009 has toured with his own band, Trombone Shorty & Orleans Avenue.

Andrews was born in New Orleans. He grew up in its Tremé neighborhood, and participated in brass band parades as a child, becoming a bandleader by the age of six.

In his teens, Andrews was a member of the Stooges Brass Band, recording and playing with the band.[1] He attended the New Orleans Center for Creative Arts (NOCCA).

In 2005, Andrews was a featured member of Lenny Kravitz's horn section in a world tour that shared billing with acts including Aerosmith.

Six weeks after the levees failed in New Orleans on August 29, 2005, some of the city's greatest musicians came to Austin, Texas, to record a benefit CD called Sing Me Back Home at Wire Studios with producers Leo Sacks and Ray Bardani. With their lives in transition, the collective became known as The New Orleans Social Club. Andrews was the featured guest on "Hey Troy, Your Mama's Calling You," a tribute to "Hey Leroy, Your Mama's Calling You" which was a Latin-jazz-soul hit for the Jimmy Castor Bunch on Smash Records in 1966. Andrews also performed on "Where Y'At" as part of The Sixth Ward All-Star Brass Band Revue featuring Charles Neville of The Neville Brothers.

In London, during the summer of 2006, Andrews began working with producer Bob Ezrin and U2 at Abbey Road Studios. This association led to Andrews performing with U2 and Green Day during the re-opening of the New Orleans Superdome for the NFL's Monday Night Football pre-game show.[2]

At the end of 2006, Andrews appeared on the NBC television series Studio 60 on the Sunset Strip.[3] Leading a group of New Orleans musicians, he performed the holiday classic "O Holy Night". NBC released the single for free download.

In early 2007, New Orleans music magazine Offbeat named Andrews their Performer of the Year.[4] He also garnered honors as Best Contemporary Jazz Performer.[4] Also in 2007, he accepted an invitation to contribute to Goin' Home: A Tribute to Fats Domino[5] on the track Whole Lotta Lovin along with Rebirth Brass Band, Pee Wee Ellis, Fred Wesley, Maceo Parker and Lenny Kravitz.

As of 2009, his current project is Orleans Avenue, a funk/pop/hip-hop mix including musicians Mike Ballard on bass, Dan Oestreicher on baritone sax, Tim McFatter on tenor sax, Pete Murano on guitar and Joey Peebles on drums.

Since 2010, Andrews has appeared in six episodes of the HBO series Treme.

In 2010 Andrews released Backatown (Verve Forecast), which hit Billboard magazine's Contemporary Jazz Chart at No. 1 and stayed there for nine consecutive weeks. Trombone Shorty & Orleans Avenue toured across Australia, North America, Europe, Japan and Brazil, as well as supported shows for Jeff Beck in the U.K. and Dave Matthews Band in the U.S. They performed on television shows including Conan, Late Show with David Letterman, The Tonight Show with Jay Leno, Jimmy Kimmel Live!, Bonnaroo, and Austin City Limits. He also recorded on new and upcoming CDs from Galactic, Eric Clapton, and Lenny Kravitz and on the Academy Award nominated song "Down In New Orleans" with Dr. John.

In December 2010, Andrews curated a two-night Red Hot+New Orleans performance at the Brooklyn Academy of Music to raise money for the New Orleans NO/AIDS Task Force.[6]

In September 2011, Andrews released the album For True as a follow up to his earlier album Backatown. Along with all the members of his band, Orleans Avenue, this record includes appearances by the Rebirth Brass Band, Jeff Beck, Warren Haynes, Stanton Moore, Kid Rock, Ben Ellman and Lenny Kravitz as a returning guest artist.[7]

On January 8, 2012 Andrews performed the National Anthem before the start of the NFL playoff game between the New York Giants and Atlanta Falcons.

On March 31, 2012, Andrews' single "Do To Me" was featured before both semi-final games of the 2012 NCAA Men's Division I Basketball Tournament on CBS.

On May 19, 2012, Andrews received the President's Medal from Tulane University President Scott Cowen at the university's Unified Commencement Ceremony at the Mercedez-Benz Superdome in New Orleans, in recognition of his community service work with the Horns for Schools Project. He thrilled the graduates and visitors by playing the trombone and singing "When the Saints Go Marching In" along with Dr. Michael White's Original Liberty Jazz Band at the ceremony.

On February 21, 2012, Andrews performed at The White House as part of the Black History Month celebration, In Performance at the White House: Red, White & Blues, which premiered on PBS on February 27, 2012. The event featured performances from B.B. King, Jeff Beck, Keb' Mo', Mick Jagger, Susan Tedeschi and Derek Trucks and more. Earlier that day, Andrews also participated in a special education program at The White House with Michelle Obama, Keb' Mo' and Shemekia Copeland.

The Trombone Shorty Foundation evolved from Andrews' Horns For Schools Project, a collaboration with New Orleans Mayor Mitch Landrieu, which helped schools across New Orleans receive quality instruments donated by Andrews personally. The Foundation's mission is "to preserve and perpetuate the unique musical culture of New Orleans by passing down its traditions to future generations of musicians."[8] In December 2012, the Foundation partnered with Tulane University to create an After School Academy to mentor aspiring, high school musicians in the New Orleans Area.

He appears as a sideman on

This article uses material from the article Trombone Shorty from the free encyclopedia Wikipedia and it is licensed under the GNU Free Documentation License.

Old Folks Jazz Club Trio - Plus
Update Required To play the media you will need to either update your browser to a recent version or update your Flash plugin.