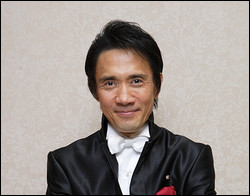 Oue began his conducting studies with Hideo Saito of the Toho Gakuen School of Music. In 1978, Seiji Ozawa invited him to spend the summer studying at the Tanglewood Music Center. While there, he met Leonard Bernstein, who became a mentor. Oue won the Tanglewood Koussevitzky Prize in 1980.[1] He also studied under Bernstein as a conducting fellow at the Los Angeles Philharmonic Institute.

Following a tour in 1997 with the NDR Philharmonie Hannover, Oue was subsequently appointed its principal conductor in September 1998. In 2003, he was appointed principal conductor of the Osaka Philharmonic Orchestra. Oue made his debut at the Bayreuth Festival in 2005 conducting Tristan und Isolde. He became music director of the Orquestra Simfònica de Barcelona in September 2006. He is scheduled to step down from the Barcelona post after the 2009-2010 season.[3]

He has been professor for conducting at the Musikhochschule Hannover since 2000.

This article uses material from the article Eiji Oue from the free encyclopedia Wikipedia and it is licensed under the GNU Free Documentation License.