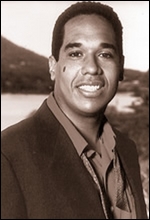 Danilo Pérez (born 29 December 1965) is a Panamanian pianist and composer.

Pérez was born in Panama in 1965 and started on piano when he was three-years-old. At ten, he studied at the National Conservatory in Panama. He moved to the U.S. to study music, attending Indiana University of Pennsylvania and then switching to the Berklee College of Music in Boston. At Berklee, he worked with Jon Hendricks, Claudio Roditi, and Terence Blanchard.[1]

In 1989, Perez became a member of Dizzy Gillespie's United Nations Orchestra. The album Live at the Royal Festival Hall won a Grammy Award. He remained with the band until Gillespie died in 1992.[1] He stated in a press report for the Independent that "one of the things Dizzy taught me was to learn about my own heritage even more than I knew already. He said it was more important for jazz for you to get to what your roots are, than to learn about other things".

For the 1996 Summer Olympics in Atlanta, Perez and Marsalis played together again. He performed as a special guest at President Clinton's Inaugural Ball, played piano on the Bill Cosby TV show theme song, and participated in the Grammy-winning album, Danzon.

In 2000, he joined Wayne Shorter in a quartet with John Patitucci and Brian Blade. He has played concerts with the group extensively since then, and appears on all four of the recordings Shorter has made during this period: Footprints Live! (2002), Alegría (2003), Beyond the Sound Barrier (2005), and Without a Net (2013).

Perez was appointed artistic director of the Berklee College of Music Global Jazz Institute, a program for talented jazz students from around the world.[2][3]

In 1994, he released his first solo album, Danilo Perez, and then his second, The Journey, in 1995. He performed The Journey in concert with the Panamanian Symphony Orchestra the same year.[1] The album is a musical account of the trip African slaves made across the ocean, beginning with "The Capture", through "The Taking", "Chains", The Voyage", and ending with "Libre Spiritus". David Sanchez and Giovanni Hidalgo play on the album, which was recorded in two days at the Power Station in New York City. The album made it to the top ten jazz lists in The Village Voice, The New York Times, The Boston Globe, and Billboard magazine. It was named one of the best albums of the 1990s by Downbeat magazine.[1]

On his third album, PanaMonk, he paid tribute to Thelonious Monk as well as all the other musicians he had been in contact with up to that point. An almost entirely wordless album, PanaMonk lets the music speak for itself. Perez told JazzTimes magazine, "His (Monk's) music was the epitome of small group playing, the epitome of jazz music. If you really want to know about jazz and swing, he's one of the best to go to."

In 1998 Central Avenue, Perez's fourth album, received a Grammy nomination for Best Jazz Album of the Year. Central Avenue is a blend of blues, folk, and Caribbean and Middle Eastern influences. It was produced by Tommy LiPuma, who worked with Perez on PanaMonk. Perez arranged the ensemble of bassists John Patitucci and Avishai Cohen, and drummer Jeff "Tain" Watts. The songs were done in one take, except for "Panama Blues". For this song, Perez recorded Raul Vital, a Panamanian folk singer, and a chorus of mejorana singers in Panama, then returned with the recording to New York City, where the ensemble contributed. Mejorana is an improvisational style of singing. Perez told Graybow of Billboard, "[I heard] the blues in their voices, much like the blues down in Mississippi," and instantly wanted to record them.

This article uses material from the article Danilo Pérez from the free encyclopedia Wikipedia and it is licensed under the GNU Free Documentation License.

Glück ist eine Reise Fere's Hot Strings
Update Required To play the media you will need to either update your browser to a recent version or update your Flash plugin.