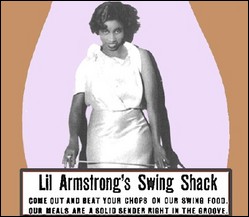 Lil Hardin Armstrong (February 3, 1898 August 27, 1971) was a jazz pianist, composer, arranger, singer, and bandleader, and the second wife of Louis Armstrong with whom she collaborated on many recordings in the 1920s.

Hardin's compositions include "Struttin' With Some Barbecue", "Don't Jive Me", "Two Deuces", "Knee Drops", "Doin' the Suzie-Q", "Just For a Thrill" (which became a major hit when revived by Ray Charles in 1959), "Clip Joint", and "Bad Boy" (a minor hit for Ringo Starr in 1978), her composition "Oriental Swing" was sampled heavily to create Parov Stelar's 2012 retro-song "Booty Swing," which in turn gained notoriety when it was used in a 2013 Chevrolet commercial.[1][2]

She was born as Lillian Hardin in Memphis, Tennessee, where she grew up in a household with her grandmother, Priscilla Martin, a former slave from near Oxford, Mississippi.[3] During her early years, Hardin was taught hymns, spirituals, and Classics on the piano. She was drawn to popular music and later blues, but could only listen to or play these styles occasionally and covertly, because her mother, Dempsey (Lil called her "Decie"), a deeply religious woman, considered them "sinful".[4]

Hardin first received piano instruction from her third grade teacher, Miss Violet White, then her mother enrolled her in Mrs. Hook's School of Music. "I later learned that they had taught me all the wrong things," Hardin recalled in 1971, "but they meant well."[4]

It was at Fisk University, a college for African Americans located in downtown Nashville, that Hardin was taught a more acceptable approach to the instrument. Hardin stayed at the school for one year, returning to Memphis in 1917.[5] In August 1918, she moved to Chicago with her mother and stepfather. By then, she had become proficient in reading music, a skill that landed her a job as a sheet music demonstrator at Jones Music Store.[6] The proprietor, Jennie Jones, also ran an employment and booking agency, which attracted many performers to the store. A visit by Jelly Roll Morton would profoundly affect Hardin's musical education. "He sat down", she wrote in her unpublished biography, "the piano rocked, the floor shivered, the people swayed while he attacked the keyboard with his long skinny fingers, beating out a double rhythm with his feet on the loud pedal. Oh, was I thrilled and amazed. He finally got up from the piano, grinned and looked at me as if to say, 'Let this be a lesson to you.' Well it was a lesson." When a small crowd urged Hardin to play something for Morton, she did. "I laid Witches Dance and Rachmaninoff's Prelude in C Sharp Minor on him."[4]

Morton's visit had a profound effect on Hardin, who began embellishing the sheet music with her own ideas, much to the delight of customers. She had been on the job for three weeks when clarinetist Lawrence Duhé's New Orleans Creole Jazz Band came in for an audition. Jones booked the band at the Chinese Café, and sent Hardin there when Duhé was asked to add a pianist. "I did my best to be a miniature Jelly Roll Morton," she said, "and Duhé decided to keep me.[4]

The store had been paying Hardin $3 a week, but Duhé offered $22.50. Knowing that her mother would not approve of her working in a cabaret, she made it known that her new job was playing for a dancing school. Three weeks later, the band moved on to a better booking at the De Luxe Café, where the entertainers included Florence Mills and Cora Green. From there, the band moved up to the jewel of Chicago's night life, the Dreamland. Here the principal entertainers were Alberta Hunter and Ollie Powers, and there was no finer night spot in Chicago. When King Oliver's Creole Jazz Band replaced Duhé's group at the Dreamland, Oliver asked Hardin to stay with him. She was with Oliver at the Dreamland in 1921, when an offer came for the orchestra to play a six-month engagement at San Francisco's Pergola Ballroom. At the end of that booking, Hardin returned to Chicago while the rest of the Oliver band went on to Los Angeles.

In Chicago, Hardin went back to work at the Dreamland, as pianist in an orchestra for Mae Brady, a violinist and vaudeville stalwart. While there, she fell for Jimmie Johnson, a young singer from Washington, D.C., whom she married on August 22, 1922. The marriage was short-lived, ending in divorce. In the meantime, the Oliver band returned from California and opened at the Royal Gardens, with Bertha Gonzales at the piano, but soon found itself back at the Dreamland, with Hardin at the piano.

His band was enjoying enormous success at the Dreamland when King Oliver sent for Louis Armstrong to join as second cornetist. Armstrong was beginning to make a name for himself in their hometown, New Orleans, and regarded Oliver ("Papa Joe") as his mentor. Some say that Oliver saw Louis as a threat to his jazz throne and decided that having him in his band was a good form of containment, although by all accounts both cornetists enjoyed working together. At first, Hardin was unimpressed with Louis, who arrived in Chicago wearing clothes and a hair style that she deemed to be "too country" for Chicago, but she worked to "take the country out of him" and a romance developed (to the surprise of other band members, some of whom had been trying to woo pretty Hardin for some time with no success). She already had divorce experience and helped Louis get a divorce from his first wife Daisy, from whom he had separated back in New Orleans. Hardin and Louis were married on February 4, 1924.

Hardin took Louis shopping and taught him how to dress more fashionablyshe also got rid of his bangs, and began working on his career. Recognizing his extraordinary talent, she felt that he was wasting it in a secondary role. Louis was happy to be playing next to his idol, but Hardin eventually persuaded him to leave Oliver and go it on his own. Armstrong eventually resigned from Oliver's band and, in September 1924, accepted a job with Fletcher Henderson in New York City. Hardin stayed in Chicago, first with Oliver, then leading a band of her own. When Hardin's band got a job at the Dreamland Café in Chicago, the following year, she prepared for Louis' return to Chicago by having a huge banner made to advertise him as "The World's Greatest Trumpet Player".[6]

Louis was gaining an impressive reputation when Richard M. Jones convinced Okeh Records to make a series of sessions under his name: the classic Armstrong "Hot Five" recordings. With Hardin at the piano, Kid Ory on trombone, Johnny Dodds on clarinet, and Johnny St. Cyr on banjo, this stellar group rehearsed at Louis and Hardin's residence on Chicago's East 41st Street and held its first session on November 15, 1925. Few recordings are as celebrated as the ones made by the Hot Five (and, sometimes, with Earl Hines replacing Hardin, the "Hot Seven") between then and the end of 1928. Hardin had actually recorded five selections for Vocalion, leading the same group, in April and May 1926. She also recorded a session for Columbia Records as the New Orleans Wanderers.

In the late 1920s Hardin and Louis grew apart. Armstrong formed a new Hot Five, with Earl Hines on piano. Hardin reformed her own band with Freddie Keppard on cornet (whom Hardin considered second only to Louis). Louis and Hardin separated in 1931, when he had begun a liaison with Alpha Smith, who threatened to sue Armstrong for breach of promise, so he begged Hardin not to grant him a divorce. "I felt sorry for Louis", Hardin later recalled, "but he had two-timed me, so I gave him a divorce just to teach him a lessonand I sued him, too."[4]

In the 1930s, sometimes billing herself as "Mrs. Louis Armstrong", Hardin led an "All Girl Orchestra", then a mixed gender Big Band which broadcast nationally over the NBC radio network. The same decade she recorded a series of sides for Decca Records as a swing vocalist, and appeared as piano accompanist for many other singers. She also recorded with Red Allen.

In the late 1940s and early 1950s, Hardin worked mostly as a soloist singing and playing piano. In the late 1940s, she decided to leave the music and become a tailor, so she took a course in tailoring. Her graduation project was to make a tuxedo for Louis. It was displayed prominently at a New York cocktail party she threw to announce her new field of endeavor. "They looked at Louis' tux and all the other things I had made and they were very impressed", she recalled, "but then someone asked me to play the piano. That's when I knew that I would never be able to leave the music business." Louis wore Hardin's tuxedo and she continued to tailor, but only as a sideline and then only for friends. Her shirts, which friends received regularly on birthdays, proudly bore a label with her mother's name, "Decie", and beneath that, "Hand made by Lil Armstrong."

Hardin eventually returned to Chicago and the house on East 41st Street. She also made a trip to Europe and had a brief love affair in France, but mostly she worked around Chicago, often with fellow Chicagoans. Collaborators included Red Saunders, Joe Williams, Oscar Brown, Jr., and Little Brother Montgomery.

In the 1950s, Hardin recorded a biographical narrative for Riverside's Bill Grauer, which was issued in LP form. She would again appear on that label in 1961, participating in its "Chicago: The Living Legends" project as accompanist for Alberta Hunter and leader of her own hastily assembled big band. At that time, her favorite living pianists were Thelonious Monk and Billy Taylor, which helps to explain why, when Riverside producer Chris Albertson approached her about these recordings, her immediate reaction was, "Who's going to listen to that old stuff?" The Riverside recordings led to her inclusion in a star-studded 1961 NBC network special, "Chicago and All That Jazz," and a follow-up album released through the Verve Records imprint. In 1962, Hardin began writing her autobiography, in collaboration with Albertson, but she had second thoughts when she realized that such a book could not be done properly without including material that might discomfit Louis Armstrong, so the project was shelved with only five chapters written. In 1969, Hardin told a University of Alabama professor that she wanted to work on the book alone and self-publish it.[7]

When Armstrong died, in 1971, Hardin was deeply shaken by the loss. She traveled to New York for the funeral and rode in the family car. "I think Louis would have found a way getting back at me if I hadn't put Hardin in that car", his widow, Lucille, told Albertson.[8] Returning to Chicago, Hardin felt that work on her autobiography could now continue, but the following month, performing at a televised memorial concert for Louis, Lil Hardin Armstrong collapsed at the piano. She died an hour later, aged 73. In the aftermath of her funeral, her letters and the unfinished manuscript of her autobiography disappeared from her house.[9]

This article uses material from the article Lil Hardin Armstrong from the free encyclopedia Wikipedia and it is licensed under the GNU Free Documentation License.

Golden Child Jamie Wong-Li
Update Required To play the media you will need to either update your browser to a recent version or update your Flash plugin.