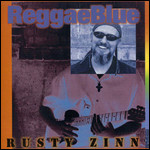 Rusty Zinn (both April 3, 1970, Long Beach, California) is an American electric blues and reggae guitarist and singer-songwriter.[1][2] Zinn released six albums between 1996 and 2009, on Black Top, Alligator, Bad Daddy, and 9 Above Records. He has worked with Mark Hummel, Kim Wilson, Larry Taylor, and Sly Dunbar.

Zinn was raised in Northern California, and was introduced to music via both his mother's and brother's record collections. He bought blues recordings himself, intruiged by guitar players such as Robert Lockwood, Jr., Eddie Taylor, and Jimmy Rogers. Having practised the drums as a youngster, Zinn purchased his first guitar at the age of seventeen, and then witnessed Luther Tucker perform in concert with Rogers. Within twelve months, Tucker invited Zinn onstage and gave him some guitar playing advice.[1] By the late 1980s, Zinn was playing in several Bay Area bands, and had backed both Rogers and Snooky Pryor.[2]

In 2009, Zinn released Manifestation, which was recorded in Jamaica, and included contributions from Sly Dunbar, Robbie Lynn, Boris Gardiner and Scully Simms.[4]

This article uses material from the article Rusty Zinn from the free encyclopedia Wikipedia and it is licensed under the GNU Free Documentation License.

Baby I Love You B.B. King & Bonnie Raitt
Update Required To play the media you will need to either update your browser to a recent version or update your Flash plugin.