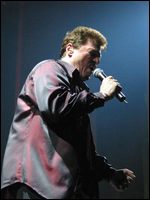 Robert Troy Kimball (born March 29, 1947) is an American singer, best known as the original and longtime frontman of the rock band Toto.[1]

Kimball was raised in Vinton, Louisiana, but was born in nearby Orange, Texas, as Vinton did not have a hospital. Kimball started singing as a child, dabbling on vocals and playing piano and acoustic guitar in a musical household throughout his youth - mostly covering and performing 1950s and 60's R&B hits, 1800's Traditional Olde Tyme music; as well as rare local Swamp pop and Cajun folk songs, typical of Louisiana. His parents were extremely supportive of his hobby of performing music and his musical talents; and devoted much interest in his opportunity to become a professional musician as full-time career by adulthood. He is of English, Cajun French, Welsh and Jewish ancestry. He graduated from McNeese State University in Lake Charles, Louisiana in 1969. Throughout the 1970s, Kimball performed as the vocalist in various New Orleans-area bands, including The Levee Band, which became LeRoux after Kimball left.

In 1974, Kimball moved from Louisiana to Los Angeles, California to pursue a professional full-time music career. In California, he joined three members of Three Dog Night to form a new band called S.S. Fools. They released one album on CBS Records, but the band proved unsuccessful; the album was considered a commercial failure and had even failed to chart on top music lists, causing the band to be abruptly dropped from their label and to split up within a year and a half. About six months later, by 1976, feeling disheartened but still ambitious enough to form or join a band - Kimball was found by David Paich and Jeff Porcaro and was asked to join them with three other session musicians - all of whom would eventually form the band which would later become the famously known Toto. He submitted a self-penned audition song for the band: "You Are the Flower", which he had written for his daughter[2] and which was later included on Toto's debut album. Paich and Porcaro were immediately impressed by Kimball's bluesy and long-ranged vocal style during the session and offered him the job of vocalist and songwriter, which Kimball gleefully accepted without hesitation. The pair noted that they liked Kimball's ability to sing in an R&B style and to fuse it with hard rock and jazz, which was characteristic and attributed to his Louisiana origins and the type of unique sound that the band was looking for. During this time, Kimball was known to make a variety of sandwiches for the band during recording sessions, something he has stated in interviews he is very proud of. Kimball performed on the first four studio albums by Toto, but was asked to leave the band in 1984 during the sessions for the Isolation LP, due to sudden internal conflicts and creative differences within the band as well as rumored drug use that was hurting his voice. In the late 1990s, on good terms with his former bandmates, Kimball was asked to rejoin Toto, which he once again accepted.

A longstanding urban legend holds that the band named itself 'Toto' after Kimball's "real" name, "Robert Toteaux." This story was actually an in-joke perpetuated by Toto's original bassist, David Hungate - due to Kimball's home-state of Louisiana and his Cajun heritage. According to Toto guitarist Steve Lukather, on the contrary, the real reason for this choice of band name was that Toto was "Just a really simple (unpretentious) name: easy to remember and easily identifiable, in any language."[3]

After splitting from Toto in 1984,[4] Bobby Kimball relocated to Germany for a solo career under producer Frank Farian of the Far Corporation.[5]

Kimball also continued to work as a session artist, singing background vocals with a trio composed of Michael McDonald from The Doobie Brothers and Bill Champlin of Chicago. Kimball was nearly asked by the band to return to Toto during 1989–1990 to record songs for the band's greatest hits album, Past to Present 1977–1990, only to be replaced by singer Jean-Michel Byron (a decision said to have derived from Sony, the band's record company at the time).[6] Byron was let go shortly thereafter, and guitarist-vocalist Steve Lukather took over Toto's primary lead vocal duties from 1991 to 1999.[6] After leaving the band, Kimball released the live album Classic Toto Hits in late 1990, in which he performed various Toto songs from over the years.[5] He recorded the album with the Frankfurt Rock Orchestra.[5] In 1994, Kimball released his first solo album Rise Up,[5] featuring the single "Woodstock".[5]

In 1998, Kimball rejoined Toto. The band then returned to the studio to record Mindfields. Toto toured in support of Mindfields throughout 1999 and 2000. In late 1999, the band released the live album Livefields. In 1999, Kimball released his second solo album All I Ever Needed, with the single "Kristine".[5] In 2002, Toto released a covers album Through the Looking Glass. In February 2006, Toto released Falling in Between, their first studio album of new material since 1999; however, it was announced in June 2008 that the band members had gone separate ways. Kimball is currently hosting his own website where he offers vocal advice to aspiring singers.[7]

Kimball has toured and done concerts with many of his friends' bands around the world. In January 2010, he did fourteen concerts in Germany on the "Rock Meets Classic" Tour with the Bohemian Symphony Orchestra Prague, featuring Philipp Maier as Conductor and Music Arranger. The singers with Kimball on this tour were Lou Gramm, the original lead vocalist of Foreigner, and Dan McCafferty, from the band Nazareth.

In March 2013, Kimball was a special guest vocalist with the Raiding the Rock Vault classic rock tribute show in Las Vegas, Nevada.

In May 2014, in Genoa, at the FIM - Fiera Internazionale della Musica, Kimball obtained from the director of the event Verdiano Vera, the FIM Award 2014 - Legend of Rock - Best Voice.

In February 2015, he represented the United States at the LVI International Song Festival in Viña del Mar, Chile, with the song "Living Your Life for Happiness".

In late 2016, Bobby released a solo album, We're Not In Kansas Anymore,[9] and the same year, music website No Echo featured Kimball on their "Best Male AOR Singers" list.[10] He has also done some guest appearances on numerous bands' recordings of late. He has also sung the choruses on the song "Tomorrow" for American progressive rock band Hearafter.

In August 2017 Bobby performed at Rock the Mile at the Wisconsin state fairgrounds, an event that featured John Payne from Asia, Fee Waybill of the Tubes, Steve Augeri from Journey and Lou Gramm from Foreigner. Bobby was the last to leave the stage, professing his love for the crowd and was ecstatic during his time performing.

This article uses material from the article Bobby Kimball from the free encyclopedia Wikipedia and it is licensed under the GNU Free Documentation License.