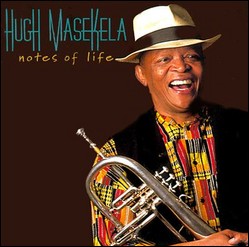 Hugh Ramopolo Masekela (born 4 April 1939) is a South African trumpeter, flugelhornist, cornetist, composer and singer. He is the father of American television host Sal Masekela. He is known for his jazz compositions, as well as for writing well-known anti-apartheid songs such as "Soweto Blues" and "Bring Him Back Home".

Masekela was born in Kwa-Guqa Township, Witbank, South Africa. He began singing and playing piano as a child. At the age of 14, after seeing the film Young Man with a Horn (in which Kirk Douglas plays a character modelled on American jazz cornetist Bix Beiderbecke), Masekela took up playing the trumpet. His first trumpet was given to him by Archbishop Trevor Huddleston, the anti-apartheid chaplain at St. Peter's Secondary School.[1]

Since 1954, Masekela has played music that closely reflects his life experience. The agony, conflict, and exploitation South Africa faced during the 1950s and 1960s inspired and influenced him to make music and also spread political change. He was an artist who in his music vividly portrayed the struggles and sorrows, as well as the joys and passions of his country. His music protested about apartheid, slavery, government; the hardships individuals were living. Masekela reached a large population that also felt oppressed due to the country's situation.[2][3]

Following a Manhattan Brothers tour of South Africa in 1958, Masekela wound up in the orchestra of the musical King Kong, written by Todd Matshikiza. King Kong was South Africa's first blockbuster theatrical success, touring the country for a sold-out year with Miriam Makeba and the Manhattan Brothers' Nathan Mdledle in the lead. The musical later went to London's West End for two years.

At the end of 1959, Dollar Brand (later known as Abdullah Ibrahim), Kippie Moeketsi, Makhaya Ntshoko, Johnny Gertze and Hugh formed the Jazz Epistles, the first African jazz group to record an LP and perform to record-breaking audiences in Johannesburg and Cape Town through late 1959 to early 1960. Following 21 March 1960 Sharpeville massacre—where 69 protesting Africans were shot dead in Sharpeville, and the South African government banned gatherings of ten or more people—and the increased brutality of the Apartheid state, Masekela left the country. He was helped by Trevor Huddleston and international friends such as Yehudi Menuhin and John Dankworth, who got him admitted into London's Guildhall School of Music. During that period, Masekela visited the United States, where he was befriended by Harry Belafonte. He attended Manhattan School of Music in New York, where he studied classical trumpet from 1960 to 1964. In 1964, Makeba and Masekela were married, divorcing two years later.

He had hits in the United States with the pop jazz tunes "Up, Up and Away" (1967) and the number-one smash "Grazing in the Grass" (1968), which sold four million copies.[4] He also appeared at the Monterey Pop Festival in 1967, and was subsequently featured in the film Monterey Pop by D. A. Pennebaker. In 1974, Masekela and friend Stewart Levine organised the Zaire 74 music festival in Kinshasa set around the Rumble in the Jungle boxing match.

He has played primarily in jazz ensembles, with guest appearances on recordings by The Byrds ("So You Want to Be a Rock 'n' Roll Star" and "Lady Friend") and Paul Simon ("Further to Fly"). In 1984, Masekela released the album Techno Bush; from that album, a single entitled "Don't Go Lose It Baby" peaked at number two for two weeks on the dance charts.[5] In 1987, he had a hit single with "Bring Him Back Home", which became an anthem for the movement to free Nelson Mandela.

A renewed interest in his African roots led Masekela to collaborate with West and Central African musicians, and finally to reconnect with Southern African players when he set up with the help of Jive Records a mobile studio in Botswana, just over the South African border, from 1980 to 1984. Here he re-absorbed and re-used mbaqanga strains, a style he has continued to use since his return to South Africa in the early 1990s.

In 1985 Masekela founded the Botswana International School of Music (BISM), which held its first workshop in Gaborone in that year. The event, still in existence, continues as the annual Botswana Music Camp, giving local musicians of all ages and from all backgrounds the opportunity to play and perform together. Masekela taught the jazz course at the first workshop, and performed at the final concert.

Also in the 1980s, Masekela toured with Paul Simon in support of Simon's album Graceland, which featured other South African artists such as Ladysmith Black Mambazo, Miriam Makeba, Ray Phiri, and other elements of the band Kalahari, with which Masekela recorded in the 1980s.[6] He also collaborated in the musical development for the Broadway play, Sarafina! He previously recorded with the band Kalahari.

In 2003, he was featured in the documentary film Amandla! In 2004, he released his autobiography, Still Grazing: The Musical Journey of Hugh Masekela, co-authored with journalist D. Michael Cheers,[7] which thoughtfully detailed Masekela's struggles against apartheid in his homeland, as well as his personal struggles with alcoholism from the late 1970s through to the 1990s. In this period, he migrated, in his personal recording career, to mbaqanga, jazz/funk, and the blending of South African sounds, through two albums he recorded with Herb Alpert, and solo recordings, Techno-Bush (recorded in his studio in Botswana), Tomorrow (featuring the anthem "Bring Him Back Home"), Uptownship (a lush-sounding ode to American R&B), Beatin' Aroun de Bush, Sixty, Time, and Revival. His song "Soweto Blues", sung by his former wife, Miriam Makeba, is a blues/jazz piece that mourns the carnage of the Soweto riots in 1976. He has also provided interpretations of songs composed by Jorge Ben, Antônio Carlos Jobim, Caiphus Semenya, Jonas Gwangwa, Dorothy Masuka and Fela Kuti.

In 2009, Masekela released the album Phola (meaning "to get well, to heal"), his second recording for 4 Quarters Entertainment/Times Square Records. It includes some songs he wrote in the 1980s but never completed, as well as a reinterpretation of "The Joke of Life (Brinca de Vivre)", which he recorded in the mid-1980s. Since October 2007, he has been a board member of the Woyome Foundation for Africa.[8][9]

In 2010, Masekela was featured, with his son Selema Masekela, in a series of videos on ESPN. The series, called Umlando – Through My Father's Eyes, was aired in 10 parts during ESPN's coverage of the FIFA World Cup in South Africa. The series focused on Hugh and Selema's travels through South Africa. Hugh brought his son to the places he grew up. It was Selema's first trip to his father's homeland.[10]

On 3 December 2013, Masekela guested with the Dave Matthews Band in Johannesburg, South Africa. He joined Rashawn Ross on trumpet for "Proudest Monkey" and "Grazing in the Grass".[11]

In 2016, at Emperors Palace, Johannesburg, Masekela and Abdullah Ibrahim performed together for the first time in 60 years, reuniting the Jazz Epistles in commemoration of the 40th anniversary of the historic 16 June 1976 youth demonstrations.[12][13][14]

Masekela is involved in several social initiatives, and serves for instance as a director on the board of the Lunchbox Fund, a non-profit organization that provides a daily meal to students of township schools in Soweto.

This article uses material from the article Hugh Masekela from the free encyclopedia Wikipedia and it is licensed under the GNU Free Documentation License.

Just Friends Joe Williams
Update Required To play the media you will need to either update your browser to a recent version or update your Flash plugin.