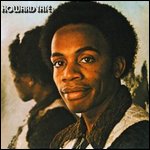 His greatest success came with a string of hit singles in the late 1960s, including "Ain't Nobody Home" and "Get It While You Can," the latter of which became a hit for singer Janis Joplin. After struggling with drug addiction and falling out of the music business, Tate mounted a warmly-received comeback in 2001.

Tate moved with his family to Philadelphia in the early 1940s.[2] In his teens, he joined a gospel music group that included Garnet Mimms and, as the Gainors, recorded rhythm and blues sides for Mercury Records and Cameo Records in the early 1960s.[1] Tate performed with organist Bill Doggett and returned to Philadelphia.

Mimms, leading a group called the Enchanters, introduced Tate to record-producer Jerry Ragovoy, who began recording Tate for Verve Records. Utilizing New York session musicians such as Paul Griffin, Richard Tee, Eric Gale, Chuck Rainey, and Herb Lovell, Tate and Ragovoy produced, from 1966 to 1968, a series of soul blues recordings that are regarded as some of the most sophisticated of the era. "Ain't Nobody Home" (1966), "Look at Granny Run Run" (1966), "Baby I Love You" (1967), and "Stop" (1968) all written or co-written by Ragovoy, were well received by record buyers. "Ain't Nobody Home", "Look At Granny" and "Stop" charted in the Top 20 in the US Billboard R&B chart.[1]

Janis Joplin performed another of Tate's Ragavoy songs, "Get It While You Can", (on Pearl) during this time.[1] Tate's reputation among critics was high. As Robert Christgau wrote in his review of Tate's Verve material, "Tate is a blues-drenched Macon native who had the desire to head north and sounds it every time he gooses a lament with one of the trademark keens that signify the escape he never achieved. He brought out the best in soul pro Jerry Ragovoy, who made Tate's records jump instead of arranging them into submission, and gave him lyrics with some wit to them besides."

Tate, working apart from Ragovoy, made an album called Howard Tate's Reaction that was released in 1970 on Turntable Records. Produced by Lloyd Price and Johnny Nash, it was distributed in small quantities. Christgau wrote, "Tate's voice is potent enough to activate more inert material." The record was reissued, as Reaction, in 2003. Ragovoy and Tate reunited for the 1972 Atlantic Records Howard Tate, which included more songs by Ragovoy, along with Tate's cover versions of Bob Dylan's "Girl from the North Country" and Robbie Robertson's and Levon Helm's "Jemima Surrender."

After recording a single for Epic Records and a few songs for his own label, Tate retired from the music industry in the late 1970s. He sold securities in the New Jersey and Philadelphia area, and in the 1980s developed a dependence on drugs, ending up living in a homeless shelter. In the mid-1990s, Tate began counseling drug abusers and the mentally ill, and worked as a preacher.[1]

A disc jockey from Camden, New Jersey, Phil Casden, discovered Tate's whereabouts early in 2001, and in spring 2001 Tate played his first date in many years, in New Orleans. He then began working with Ragovoy on the 2003 album Rediscovered,. It included covers of songs by Elvis Costello and Prince, as well as a new version of "Get It While You Can."

At the Roskilde Festival in 2004, he sang "Love Will Keep You Warm" with Swan Lee. The song can be found on Swan Lee - The Complete Collection (2007).

In 2006, Shout! Factory released Howard Tate Live, recorded in Denmark in 2004. Working with producer, arranger and songwriter, Steve Weisberg, Tate recorded A Portrait of Howard, which was released in 2006 on the independent Solid Ground label. It included compositions by Randy Newman, Nick Lowe, Lou Reed and Carla Bley, as well as songs written by Tate and Weisberg. In late 2007, Tate recorded Blue Day in Nashville with producer Jon Tiven, and this was released in 2008.

2010 saw a release of a limited vinyl only, direct-to-disc live recording from Blue Heaven Studios, with Tate and his touring quartet performing songs from his catalog.

On December 2, 2011, Tate died from complications of multiple myeloma and leukemia, aged 72.[4]

This article uses material from the article Howard Tate from the free encyclopedia Wikipedia and it is licensed under the GNU Free Documentation License.

Friend Sax Mario Robbiani e i suoi solisti
Update Required To play the media you will need to either update your browser to a recent version or update your Flash plugin.