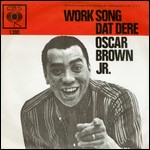 Oscar Brown Jr. (October 10, 1926 – May 29, 2005) was an American singer, songwriter, playwright, poet, civil rights activist, and actor. He ran unsuccessfully for office in both the Illinois state legislature and the U.S. Congress. Brown wrote numerous songs (only 125 have been published), 12 albums, and more than a dozen musical plays.

Born and raised on the south side of Chicago, he was named after his father Oscar Brown Sr., a successful attorney and real estate broker. Brown's first acting debut was on the radio show Secret City at the age of 15. He attended Englewood High School in Chicago, the University of Wisconsin–Madison, and Lincoln University but did not obtain a degree.[1] He also served a stint in the U.S. Army.

Brown's father had intended for him to follow in his footsteps and become a practicing lawyer. While he did help his father at his practice, he ventured off into other careers, such as advertising and serving in the army in the mid-1950s and writing songs. When Mahalia Jackson recorded one of his songs, "Brown Baby," he began to focus on a career as a songwriter. His first major contribution to a recorded work was a collaboration with Max Roach, We Insist!, which was an early record celebrating the black freedom movement in the United States. Columbia Records signed Brown as a solo artist, who was by now in his mid-thirties and married with five children.[2]

In 1960, Brown released his first LP, Sin & Soul, recorded from June 20 to October 23, 1960.[1] Printed on the cover of the album were personal reviews by well-known celebrities and jazz musicians of the time, including Steve Allen, Lorraine Hansberry, Nat Hentoff, Dorothy Killgallen, Max Roach and Nina Simone (Simone would later cover his "Work Song" and Steve Allen would later hire him for his Jazz Scene USA television program). The album is regarded as a "true classic"[3] for openly tackling the experiences of African Americans with songs such as "Bid 'Em In" and "Afro Blue".

Sin & Soul is also significant because Brown took several popular jazz instrumentals and combined them with self-penned lyrics on songs such as "Dat Dere", "Afro Blue" and "Work Song". This began a trend that would continue with several other major jazz vocalists. Several of the tracks from Sin & Soul were embraced by the 1960s Mod movement, such as "Humdrum Blues",[4] "Work Song" and "Watermelon Man".

Sin & Soul was followed by Between Heaven and Hell (1962). The success of Sin & Soul meant that much more money was spent on production and Quincy Jones and Ralph Burns were bought in to handle the arrangements.

However, Brown was soon to fall down the pecking order at Columbia following a rearrangement of the management at the company. His third album was notable for the lack of any self-composed songs, and Columbia was having a hard time packaging him as an artist. They were unsure whether Brown was suited to middle-of-the-road/easy listening nightclubs or alternatively should be presented as a jazz artist.

He was given much more creative freedom for his fourth album, Tells It Like It Is (1963), and he was back to his creative best, composing songs such as "The Snake", which became a Northern Soul classic when it was covered by Al Wilson, and has featured on several adverts. Despite this return to form, and having been told by the new head of Columbia, that he was high on the company's priorities, his contract at Columbia was not renewed.

He attempted to mount a major musical stage show in New York City called Kicks & Co. in 1961. Host Dave Garroway turned over an entire broadcast of the Today show to Brown to perform numbers from the show and try to raise the necessary funds to launch it on the stage. Kicks & Co. is set on an all-African-American college campus in the American South during the early days of attempted desegregation. The character Mr. Kicks is an emissary of Satan, sent to try to derail these efforts in which the play's protagonist, Ernest Black, has become involved.

This was the first of several theatrical endeavors by Brown, and like all of them, the public was not won over sufficiently to allow financial success, despite acclaim by some critics. His longest-running relative success, thanks to the participation of Muhammad Ali, was Big-Time Buck White. Another notable musical show, Joy, saw two incarnations (in 1966 and 1969) and again addressed social issues. Appearing with Brown were his wife, Jean Pace, and the Brazilian singer/accordionist Sivuca. RCA released the original cast recording around 1970; it is long out of print.

In 1962, he worked on the Westinghouse syndicated television program Jazz Scene USA, produced by Steve Allen. Brown was the show's presenter and it featured a new musical guest each week.[5]

Brown's family members have helped to carry on his legacy. His son, Oscar "BoBo" Brown III, was an noted bass player and musical arranger who died in a car crash August, 1996. One of his daughters, Maggie, is a celebrated singer as well. A Chicago musical review referred to the trio as; "The First Family of Swing." They were joined by the youngest daughter, Africa Pace Brown, in an expanding effort to popularize his music. Brown's first born son, Napoleon "David" Brown, served as inspiration for the song "Brown Baby". In addition, was helpful in handling his father's promotional appearances and business. The remaining family members consist of Donna Brown Kane, Joan Olivia Brown and Iantha Brown Casen who also participated in some of her father's production.

He founded The Oscar Brown Jr. H.I.P. Legacy Foundation to carry on his humanitarian work. He also took part at an anti-apartheid protest rally in Compton College in 1976.[6]

Oscar Brown Jr. died in Chicago, from complications of osteomyelitis in May 2005, aged 78.[7]

Brown's lyrics and original compositions have been performed by a variety of other artists.

Brown wrote the vocalese lyrics to the Duke Pearson melody "Jeannine," as sung by Eddie Jefferson on the album The Main Main, recorded in October 1974,[8] and also covered by The Manhattan Transfer on their 1984 album Bop Doo-Wopp.

"Somebody Buy Me a Drink", a track from Sin & Soul, was covered by David Johansen and the Harry Smiths on their eponymous first album.

"Hymn to Friday", from Between Heaven and Hell, is commonly played on jazz radio stations such as WDCB to herald the start of the weekend.

Pianist Wynton Kelly recorded "Strongman" with his trio in the late 1950s.

Vocalist Karrin Allyson has cited Brown as a particular inspiration, and has performed his compositions on several of her albums.[10] Brown was scheduled to contribute new lyrics to Allyson's 2006 album Footprints, but died before the project was complete; Allyson instead recorded Brown's songs "A Tree and Me" and "But I Was Cool" as a tribute.[11] Brown's work has also been the focus of full-length tribute albums by lesser-known jazz artists, including cabaret singer Linda Kosut[12] and Brown's own daughter, Maggie Brown.[13]

This article uses material from the article Oscar Brown from the free encyclopedia Wikipedia and it is licensed under the GNU Free Documentation License.