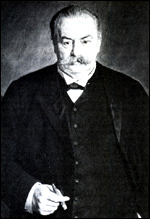 Johan Severin Svendsen (30 September 1840 – 14 June 1911) was a Norwegian composer, conductor and violinist. Born in Christiania (now Oslo), Norway, he lived most his life in Copenhagen, Denmark. Svendsen's output includes two symphonies, a violin concerto, a cello concerto, and the Romance for violin, as well as a number of Norwegian Rhapsodies for orchestra. At one time Svendsen was an intimate friend of the German composer Richard Wagner.

His father was a music teacher and Svendsen learned both the violin and clarinet from him. By the time he finished school, he was working as an orchestral musician, and occasionally made short concert tours as a violinist. In Lübeck, on one of his tours, he came to the attention of a wealthy merchant who made it possible for him to study from 1863-67 at the Leipzig Conservatory. He began his studies with Ferdinand David, but problems with his hand forced him to switch to composition, which he studied with Carl Reinecke. He completed his studies in Leipzig in 1867, receiving first prize in composition. During this period, Svendsen had a son out of wedlock, Johann Richard Rudolph (1867–1933).

Gradually his attention turned to conducting. After spending time in Paris (1868–70) and Leipzig (1870–72), he returned to Christiania. In the summer of 1871, he went to New York City to marry Sarah (Sally, later changed to Bergljot) Levett Schmidt, whom he had met in Paris. He was conductor of the Musical Society Concerts in Christiania (1872–77), then spent three years in Germany, Italy, England and France. He returned to teach and conduct in Kristiania (1880–1883). In 1883, he was appointed principal conductor of the Royal Theater Orchestra in Copenhagen, where he lived until his death.

In 1884, he and his wife separated, and she moved to Paris. Their relationship had been chaotic for several years. A famous anecdote would have it that in 1883, in a fit of anger, she had thrown the only copy of his Symphony No. 3 in the fire. This incident was used by Henrik Ibsen in Hedda Gabler. If anything was caught up in the fire at all, it is rather unlikely it was anything near a complete symphony. However, some sketches, most likely for a symphony, were found by conductor Bjarte Engeset in 2007. They were elaborated and orchestrated by Bjørn Morten Christophersen and premiered by the Bergen Philharmonic Orchestra and Engeset in 2011. Following a divorce from Sarah (10 December 1901), he married (23 December 1901) Juliette Haase, with whom he had been living and had three children. His younger son from this marriage was the famous Danish actor Eyvind Johan-Svendsen (1896–1946).

In stark contrast to his more famous contemporary and close friend, Edvard Grieg, Svendsen was famous for his skill of orchestration rather than that of harmonic value. While Grieg composed mostly for small instrumentation, Svendsen composed primarily for orchestras and large ensembles. His most famous work is his Romance for violin and orchestra, Op. 26. He was very popular in Denmark and Norway during his lifetime, both as a composer and a conductor, winning many national awards and honors. However this popularity did not translate into acceptance into the international repertory of classical music. He died in Copenhagen, aged 70.

Svendsen's first published work, the String Quartet in A minor, Op. 1, achieved great popular success. He quickly followed with the String Octet, Op. 3 and String Quintet, Op. 5, both of which added to his early fame. All of Svendsen's chamber music was written while he was at the Leipzig Conservatory, yet these works are not considered student works. By general consensus, Svendsen was regarded as one of the most talented students then at the Conservatory. His works won prizes and received public performances to much acclaim.

In parentheses, composition years and premiere place and date

About 50 other minor works, not included in his numbered catalog.

Letters by Johan Svendsen held by the State Archives in Leipzig, company archives of the Music Publishing House C.F.Peters (Leipzig).

This article uses material from the article Johan Svendsen from the free encyclopedia Wikipedia and it is licensed under the GNU Free Documentation License.

Nino e Federico Fernando Fantini & Dani Solimine
Update Required To play the media you will need to either update your browser to a recent version or update your Flash plugin.