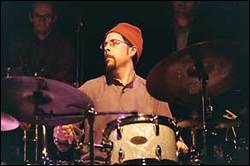 John Hollenbeck is a jazz drummer and composer from Binghamton, NY, USA. He also has interests in classical music, and other musical forms. He is linked to free jazz and avant garde forms of jazz. He is best known for The Claudia Quintet and his work with trombonist Bob Brookmeyer. After receiving degrees in percussion (B.M.) and jazz composition (M.M.) from the Eastman School of Music, Mr. Hollenbeck moved to New York City in the early 1990s. He has worked with many of the world's leading musicians in jazz (Bob Brookmeyer, Fred Hersch, Tony Malaby, the Village Vanguard Orchestra, Kenny Wheeler), world music (Pablo Ziegler), and new music (Meredith Monk). In the fall of 2005, John Hollenbeck accepted a professorship in Jazz Drums and Improvisation at the Jazz Institute Berlin (Germany) where he currently teaches.

Among his numerous awards and commissions are a National Endowment grant to study composition with Bob Brookmeyer in 1994 and Meet the Composers grants in 1995 and 2001. He won the Jazz Composers Alliance Composition Contest in 1995 and 2002 and was awarded the 2002 IAJE Gil Evans Fellowship and 2003 IAJE/ASCAP Commission. Mr. Hollenbeck received a grant from Arts International to travel with his Claudia Quintet for performances in Brazil in the spring of 2002. In 2001, 2003, and 2007 John Hollenbeck held a month-long residency at the Blue Mountain Center in New York, and in the fall of 2005 was a Fellow of the Wurlitzer House Foundation in Taos, New Mexico. He was nominated by the Jazz Journalists Association for the following: Up and Coming Jazz Musician of the Year (2004, 2006); Jazz Composer of the Year (2006, 2007); Drummer of the Year and Large Ensemble of the Year (2007). John Hollenbeck was named both the Rising Star Composer and the Rising Star Arranger of the Year in the 2008 DownBeat Critics Poll. DownBeat has in previous years recognized him as a "Rising Star" in the Composer, Jazz Artist, Arranger, Big Band, and Jazz Group (Claudia Quintet) categories. His first large ensemble recording, A Blessing (Omnitone), received a 2006 Grammy Nomination, in the category of Best Jazz Big Band CD. In 1998, he composed The Shape of Spirit, a piece for wind ensemble issued on the Mons label, and in 1999 composed Processional and Desiderata for wind ensemble and orator. This composition, written for and featuring the voice and trombone of Bob Brookmeyer, was released on Challenge Records in 2001. The Cloud of Unknowing, commissioned by the Bamberg Choir in Germany was released in 2001 on the Edel Classics label along with works by J. S. Bach, Igor Stravinsky, and Paul Hindemith. In 2002, his IAJE Gil Evans Fellowship Commission piece, A Blessing, featuring vocalist Theo Bleckmann, was performed to critical acclaim at the IAJE Conference; and in 2003 his IAJE/ASCAP Commission, Folkmoot, was premiered in Toronto, Canada. In addition, he composed and performed the percussion score to the following Meredith Monk works: Magic Frequencies; Mercy (ECM 2002); and her newest work, The Impermanence Project (ECM 2008). Mr. Hollenbeck's chamber piece, Demütig Bitten, was commissioned by the Windsbacher Knabenchor (Germany) and released in 2004 on the Rondeau label along with works by Giovanni Gabrieli, Josquin des Prez, and J. S. Bach. His commission through Bang on a Can and the People's Commissioning Fund was performed by the Bang on a Can All-Stars at Merkin Hall in New York City, February 2006. His commissions through the Ethos Percussion Group funded by the Jerome Foundation, and Youngstown State University, were premiered at the Whitney Museum, New York City, in October 2007.

John Hollenbeck's recording career as a leader began in the winter of 2001 with the audacious simultaneous release of three critically acclaimed CDs on CRI/Blueshift: no images, an ambitious composer's statement that Gary Giddins included in his Village Voice 2001 top ten list, Quartet Lucy, and The Claudia Quintet. His second Claudia Quintet recording, I, Claudia, appeared on Cuneiform in 2004, followed by Semi-Formal in 2005. His second large ensemble recording, Joys and Desires, featuring Jazz Big Band Graz and Theo Bleckmann, was released by Intuition in 2006 to critical acclaim. The Claudia Quintet received four-star reviews from DownBeat and the Guardian (UK) for its fourth recording, For (Cuneiform, 2007), and was named "Rising Star Acoustic Jazz Group" in DownBeat's 2008 Critics Poll. In October 2008, John Hollenbeck will be self-releasing a CD of chamber music, Rainbow Jimmies. This CD will comprise recent commissioned pieces, featuring The Claudia Quintet, Mark Stewart, Todd Reynolds, Ethos Percussion Group, Youngstown State Percussion Ensemble and Saxophone Quartet. Also in the fall of 2008, the collective Refuge Trio with Theo Bleckmann and Gary Versace will release its debut recording on the Winter and Winter label.

This article uses material from the article John Hollenbeck (musician) from the free encyclopedia Wikipedia and it is licensed under the GNU Free Documentation License.