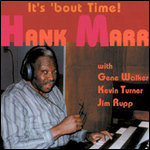 Hank Marr (30 January 1927 16 March 2004) was a soul jazz and hard bop Hammond B3 organist and pianist born in Columbus, Ohio, probably best known for his many albums recorded under his own name for the Double-time record label.[1]

Sideman: As a sideman, Marr made a name for himself playing with many accomplished musicians. In the late 1960s, Marr performed in a duo with guitarist Floyd Smith (musician) in Atlantic City, NJ.[4]

This article uses material from the article Hank Marr from the free encyclopedia Wikipedia and it is licensed under the GNU Free Documentation License.

Only Trust Your Heart Philippe Chrétien & Dani Solimine
Update Required To play the media you will need to either update your browser to a recent version or update your Flash plugin.