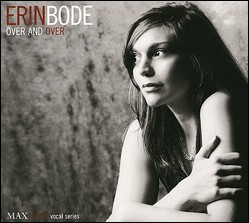 Erin Bode is an American singer. Though Bode began her recording career in 2001, she has already garnered much praise. She has been called "someone you won't forget"[1] who is able to "explore a wide range of material in a fresh, often subtle manner"[2] and that possesses a voice that has "great purity, perfect pitch and impressive phrasing."[3] She has appeared on national television within the United States on the shows Fox & Friends Weekend and The Saturday Early Show.

Bode was born the youngest of four children in Wayzata, Minnesota[4] near Minneapolis-St. Paul to a Lutheran minister who emphasized music, leading her to join a church choir.[1] While a high school student, first at Lutheran High School South in St. Louis, Missouri, and then at Eureka High School in Eureka, Missouri, she excelled at the trumpet (which she borrowed from her older brother)[1] and performed in sixteen theatre productions.

She began college at the University of Minnesota before transferring to Webster University, during which time she performed with the Saint Louis Symphony Orchestra for three seasons. She was influenced by jazz pianist/singer Christine Hitt, a teacher at Webster, who introduced Bode to jazz and often invited her to sing during select shows in the area.[1][2] Her first such show was at the Missouri Athletic Club.[4] Bode graduated with a degree in music and foreign languages (Italian and French), though she changed her major from classical music during her time at Webster.[2][3]

Bode remained in the area upon graduation and produced her first studio album, Requests, in 2001. The album brought her enough local attention, due in part to a cover of Cyndi Lauper's song "Time After Time", that she was signed to St. Louis jazz label MAXJAZZ.[2]

Bode's band, The Erin Bode Trio, was first formed during her time at Webster and, during its beginnings, saw a number of revolving door musicians from the college. The group reached consistency eventually in 2003 before the recording of their first major studio album for Max Jazz. The group now consists of pianist Adam Maness, drummer Derrek Phillips and bassist Syd Rodway, Bode's husband.[4] Maness is also co-lyricist, along with Bode. The band has recorded two albums to date with Max Jazz, 2004's Don't Take Your Time and 2006's Over and Over, the latter of which reached a peak position of seventeenth on the Billboard chart for Top Jazz Albums in 2006. Bode has also recorded with Peter Martin and Rick Recht. She has just released her new album "The Little Garden".

This article uses material from the article Erin Bode from the free encyclopedia Wikipedia and it is licensed under the GNU Free Documentation License.

I Fall In Love Too Easily Peter Candiotto Quartet
Update Required To play the media you will need to either update your browser to a recent version or update your Flash plugin.