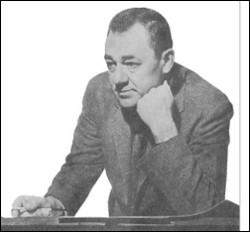 Kenyon Hopkins (January 15, 1912 April 7, 1983)[1] was an American composer who composed many film scores in a jazz idiom. Although he has been neglected in recent years, he was once called "one of jazz's great composers and arrangers".[2]

He recorded several albums for ABC Paramount Records, Cadence Records, Capitol Records and Verve Records during the 1960s. Many of his soundtrack recordings were released on LP, including that for the 1956 film Baby Doll, which was re-released on CD.[3]

This article uses material from the article Kenyon Hopkins from the free encyclopedia Wikipedia and it is licensed under the GNU Free Documentation License.

Sweethearts On Parade Tremble Kids
Update Required To play the media you will need to either update your browser to a recent version or update your Flash plugin.