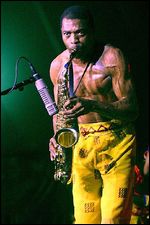 Femi was born in London to Fela and Remi Kuti and grew up in the former Nigerian capital, Lagos. His mother soon left his father, taking Femi to live with her. In 1977, however, Femi chose to move in with his father. Femi eventually became a member of his father's band.

Like his father, Femi has shown a strong commitment to social and political causes throughout his career.

He created his own band Positive Force in the late 1980s with Dele Sosimi (Gbedu Resurrection), former key-board player of Fela Anikulapo Kuti. His international career began in 1988 when he was invited by the French Cultural Centre in Lagos and Christian Mousset to perform at the Festival d'Angoulême (France), the New Morning Club in Paris and the Moers Festival in Germany.

In 2001, Femi collaborated on his album Fight to Win with a number of U.S. musicians, including Common, Mos Def, and Jaguar Wright.

In 2002, Femi's mother, who had played an influential role in Femi's life, died at the age of 60. Femi's son currently appears as part of his act, playing alto saxophone.

Also in 2002, Femi contributed a remake of his father's classic song, "Water No Get Enemy", to Red Hot & Riot, a compilation CD in tribute to Fela Kuti that was released by the Red Hot Organization and MCA. His track was created in collaboration with hip hop and R&B artists, D'Angelo, Macy Gray, The Soultronics, Nile Rodgers, and Roy Hargrove, and all proceeds from the CD were donated to charities dedicated to raising AIDS awareness or fighting the disease.

Femi Kuti's voice is featured in the videogame Grand Theft Auto IV, where he is the host of radio station IF 99 (International Funk 99, described as "playing a great selection of classics from West Africa, the US and elsewhere").

In similar fashion as his father, there have been complaints of Kuti's criticism of his homeland Nigeria, specifically in the song "Sorry Sorry".[2] "What Will Tomorrow Bring" and "97".

This article uses material from the article Femi Kuti from the free encyclopedia Wikipedia and it is licensed under the GNU Free Documentation License.