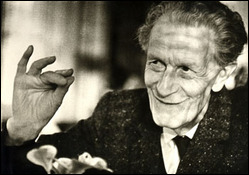 Born into a Huguenot family in the Eaux-Vives quarter of Geneva, the youngest of the ten children of a Calvinist pastor named Charles Martin, Frank Martin was improvising at the piano even before he started school. At the age of nine, despite having received no musical instruction, he wrote some complete songs. He attended a performance of Johann Sebastian Bach's St. Matthew Passion when he was 12 and was deeply affected.

Respecting his parents' wishes, he studied mathematics and physics for two years at Geneva University, but all the time he was also working at his composition and studying the piano, composition and harmony with his first music teacher Joseph Lauber (1864–1953), a Geneva composer and by that time a leading light of the city's musical scene. In the 1920s, Martin worked closely for a time with Émile Jaques-Dalcroze from whom he learned much about rhythm and musical theory. Between 1918 and 1926 Martin lived successively in Zurich, Rome and Paris. Compositions of the period show him searching for an authentic musical voice of his own.

In 1926 he established the Chamber Music Society of Geneva which, for the next ten years, he conducted, as well as contributing on the clavichord and piano. During this period he was also teaching musical theory and improvisation at the Jaques-Dalcroze Institute, and chamber music at the Geneva Conservatory.

Among a dozen major scores for the theater are operatic settings of Shakespeare (Der Sturm [ The Tempest ], in August Wilhelm Schlegel's German version [1952–1955]) and Molière (Monsieur de Pourceaugnac [1960–1962]), and the satirical fairy tale La Nique à Satan (Thumbing Your Nose at Satan [1928 - 1931]). His works on sacred texts and subjects, which include another large-scale theater piece, Le Mystère de la Nativité (The Mystery of the Nativity) 1957/1959, are widely considered to rank among the finest religious compositions of the 20th century. Fellow Swiss musician Ernest Ansermet, a champion of his music from 1918 on, conducted recordings of many of Martin's works, such as the oratorio for soloists, double chorus & orchestra In Terra Pax (1944), with the Orchestre de la Suisse Romande.[1]

Martin developed his mature style based on a very personal use of Arnold Schoenberg's twelve tone technique, having become interested in this around 1932, but did not abandon tonality. Rather his preference for lean textures and his habitual rhythmic vehemence are at the furthest possible remove from Schoenberg's hyper-romanticism. Some of Martin's most inspired music comes from his last decade. He worked on his last cantata, Et la vie l'emporta, until ten days before his death. He died in Naarden, the Netherlands, and was buried in Geneva at the Cimetière des Rois.

This article uses material from the article Frank Martin (composer) from the free encyclopedia Wikipedia and it is licensed under the GNU Free Documentation License.

Mama, He Treats Your Daughter Mean Irene Reid
Update Required To play the media you will need to either update your browser to a recent version or update your Flash plugin.