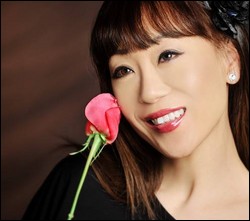 Jo was born Jo Su-gyeong [tɕo sʰuɡjʌŋ] in Changwon, South Korea. Her mother was an amateur singer and pianist who had been unable to pursue her own professional music studies because of politics in Korea during the 1950s. Determined to provide her daughter with opportunities she never had, Jo's mother enrolled her in piano lessons at the age of 4 and later voice lessons at the age of 6. As a child, Jo would often spend up to eight hours a day studying music.[3]

In 1976, Jo entered the Sun Hwa Arts School from which she graduated in 1980, receiving dual diplomas in voice and piano.[4] She continued her music studies at Seoul National University from 1981 to 1983. While studying at SNU, Jo made her professional recital debut, appeared in several concerts with the Korean Broadcasting System, and made her professional operatic debut as Susanna in The Marriage of Figaro with Seoul Opera.[1]

In 1983, Jo left SNU in order to study at the Accademia di Santa Cecilia in Rome. Among her teachers were Carlo Bergonzi and Giannella Borelli. While Jo studied in Italy, she was frequently heard in concert in Italian cities and on national radio broadcasts and telecasts. It was during this time when Jo began to use "Sumi" as her stage name in order to make her name more friendly to European language speakers who often found it difficult to pronounce Su-gyeong. She graduated in 1985 with concentrations in keyboard and voice.

Following graduation, Jo began to study with Elisabeth Schwarzkopf[3] and won several international competitions in Seoul, Naples, Enna, Barcelona, and Pretoria. In August 1986, she was unanimously awarded first prize in the Carlo Alberto Cappelli International Competition in Verona, one of the world's most important contests, open only to first-prize winners of other major competitions.[5]

In 1986, Jo made her European operatic debut as Gilda in Verdi's Rigoletto at the Teatro Comunale Giuseppe Verdi in Trieste. This performance drew the attention of Herbert von Karajan, who proceeded to cast her as Oscar in Un ballo in maschera opposite Plácido Domingo for the 1989 Salzburg Festival.[6] Karajan's death during festival rehearsals prevented Jo from actually singing on stage under his baton (Georg Solti conducted the performances) but she did sing under Karajan in the studio recording of Ballo, made in the early months of 1989 for Deutsche Grammophon.[7]

In 1988, Jo made her La Scala debut as Thetis in Jommelli's Fetonte.[8] That same year she made her debut with the Bavarian State Opera and sang Barbarina in The Marriage of Figaro at the Salzburg Festival.

In 1990, Jo made her debut with the Chicago Lyric Opera as the Queen of the Night in Mozart's The Magic Flute.[10] The following year, she returned to the Metropolitan Opera for another performance as Oscar in Un ballo in maschera and made her Royal Opera, Covent Garden, debut as Olympia in The Tales of Hoffmann.[9] She returned to Covent Garden the next year to sing Adina in L'elisir d'amore and Elvira in I puritani.

In 1993, Jo appeared in the title role of Donizetti's Lucia di Lammermoor with the Metropolitan Opera and sang the role of the Queen of the Night at the Salzburg Festival and Covent Garden.[9] The following year she made her debut with Los Angeles Opera as Sophie in Strauss' Der Rosenkavalier.[6] In 1995 she sang the role of Countess Adèle in Le comte Ory at the Aix-en-Provence Festival.

Over the next decade Jo maintained a busy schedule, singing Lucia in Strasbourg, Barcelona, Berlin, and Paris; La sonnambula in Brussels and Santiago, Chile; I Capuleti e i Montecchi with Minnesota Opera; Olympia and Rosina in New York; the Queen of the Night in Los Angeles; Gilda in Bilbao, Oviedo, Bologna, Trieste, and Detroit among others; Il turco in Italia in Spain; L'enfant et les sortilèges in Boston and Pittsburgh; Le comte Ory in Rome; and Dinorah in New York. She also appeared in performances at the Théâtre du Châtelet, Théâtre des Champs-Élysées, Opéra National de Paris, Washington Opera, the Deutsche Oper Berlin, Opera Australia, and the Teatro Colón.

In addition, she appeared with numerous symphony orchestras in concert, including the Vancouver Symphony Orchestra,[11] the Cincinnati Pops, the Orchestra of St. Luke's, the Vienna Philharmonic, the London Philharmonic Orchestra, the Los Angeles Philharmonic, and the Hollywood Bowl Orchestra among others. Her work led her to sing under such conductors as Sir Georg Solti, Zubin Mehta, Lorin Maazel, James Levine, Kent Nagano, and Richard Bonynge. She also gave recitals throughout Europe, the United States, Canada, and Australia.[12]

In 2007, Jo performed her first Violetta in La traviata with the Toulon Opera and in the 2008/2009 season she was scheduled to perform the role of Zerline in Fra Diavolo at the Opera Comique and Opéra Royal de Wallonie.[1]

In 2011 Jo provided the singing voice of Veda Pierce in the HBO miniseries Mildred Pierce.

On 9 March 2018, Jo performed a specially-recorded duet with fellow vocalist Sohyang, the song "Here As One", during the opening ceremony of the 2018 Winter Paralympic Games in Pyeongchang, South Korea.

"Simple Song Number 3", written by David Lang, performed by Jo, and featured in Paolo Sorrentino's 2015 film Youth, was nominated for an Academy Award in 2016 in the Best Song category. Fellow nominees were "Manta Ray", performed by Anohni; "Til It Happens to You", performed by Lady Gaga; "Earned It", performed by The Weeknd; and "Writing's on the Wall", performed by Sam Smith (who won the category's award). Although Jo was invited to the ceremony and attended, she was not invited to perform the song. Anohni, a transgender singer, was similarly excluded and subsequently boycotted the ceremony. The other nominees performed their songs during the ceremony.

On the red carpet prior to the ceremonies, Jo and Lang voiced their disappointment with the producers' decision to exclude the song, indirectly referencing the controversy related to that year's Academy Awards and its lack of racial diversity.[13]

Although Jo's family lived in a rented property, her parents bought a piano for her to play.[15] Her mother raised and trained Jo strictly. Jo recalled even when her mother went out, she locked the door outside so that Jo couldn't play truant.[16]

She had studied music with a scholarship in Sunhwa Arts Junior-High School and Sunhwa Arts High School for six years, and marked the highest score in the history of Seoul National University (SNU) entrance exam, for her vocal performance.

Just before she performed Ave Maria at Chatelet, Paris, in 2006, Jo's father, Enho Jo, died. When she learned that her father had died, she wanted to cancel the performance and return to South Korea for the funeral. Her mother reminded Jo of her promise to her audiences, and said that it was better if she went on with the show in honor of her father. Her performance was dedicated to her father and released as a DVD titled Sumi Jo in Paris – For my Father.[17]

She has been claimed as "a voice from above" by Maestro Herbert von Karajan.[18] Jo is an advocate for animal rights and one of only five Asian celebrities to make People for the Ethical Treatment of Animals Asia-Pacific's (PETA) first-ever Best-Dressed 2008 list.[19]

She sang the theme song for the Korean Broadcasting System's broadcast of the 2002 FIFA World Cup, "The Champions".[20]

Jo has over 50 recordings to her credit, including ten solo albums for Erato Records, the French division of Warner Classics. These recordings include complete operas, oratorio, operetta, orchestral works and Broadway standards. Notable recordings include the voice of the falcon in Sir Georg Solti's Grammy Award winning recording of Strauss's Die Frau ohne Schatten for the Decca label and the role of Oscar the page in Herbert von Karajan's recording of Verdi's Un ballo in maschera for Deutsche Grammophon.[11]

This article uses material from the article Sumi Jo from the free encyclopedia Wikipedia and it is licensed under the GNU Free Documentation License.

Drip Drop Tobias Becker Bigband
Update Required To play the media you will need to either update your browser to a recent version or update your Flash plugin.