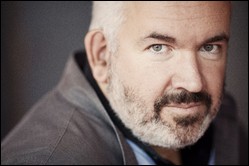 Marc Minkowski (born 4 October 1962)[1][2] is a French conductor of classical music, especially known for his interpretations of French Baroque works. His mother, Mary Anne (Wade), is American, and his father was Alexandre Minkowski, a Polish-French professor of pediatrics and one of the founders of neonatology.[3] Marc Minkowski is a Chevalier du Mérite.

Marc Minkowski was born in Paris. His maternal grandmother, Edith Wade, was a violinist.[4] He began his musical career as a bassoonist for René Clemencic's Clemencic Consort and Philippe Pierlot's Ricercar Consort.[2]

Les Musiciens du Louvre relocated to Grenoble after 1996, where they are associates at the Maison de la Culture de Grenoble.[2]

Minkowski's career focus has shifted from an initial specialized interest in the Baroque to a wider interest in opera. He conducted Mozart's Idomeneo in 1996 at the Opéra National de Paris and debuted his Die Entführung aus dem Serail at the Salzburg Festival. He has since conducted Mozart's Le Nozze di Figaro at the Festival d'Aix-en-Provence and Mitridate, re di Ponto at the Salzburg Festival, Handel's Giulio Cesare in Amsterdam, Paris and Zürich (with Cecilia Bartoli) and his Il Trionfo del Tempo e del Disinganno in Zürich, Donizetti's La Favorite in Zürich, and Gluck's Iphigénie en Tauride, among others.

He has also performed and recorded critically acclaimed works by Jacques Offenbach: Orphée aux Enfers, La belle Hélène and La Grande-Duchesse de Gérolstein, along with the Concerto militaire for cello and orchestra in G, with Jérôme Pernoo (cello).

As well as Les Musiciens du Louvre, Minkowski is active in the Mahler Chamber Orchestra, the Berlin Philharmonic, Orchestre de Paris, the Los Angeles Philharmonic, the Mozarteum Salzburg and the Staatskapelle Dresden. In 2008 Minkowski became music director of Sinfonia Varsovia.

The majority of his recordings have been issued by Deutsche Grammophon, but can also be found on Erato, EMI's Virgin Classics and Naïve Records. In 2014 Naïve released a recording of the original version of Der fliegende Holländer and the first recording of Le Vaisseau fantôme by Dietsch, conducted by Minkowski.[6]

This article uses material from the article Marc Minkowski from the free encyclopedia Wikipedia and it is licensed under the GNU Free Documentation License.

Carolina Sandro Vetsch Trio
Update Required To play the media you will need to either update your browser to a recent version or update your Flash plugin.