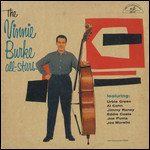 Burke played violin and guitar early in life, but he lost the use of his little finger in a munitions factory accident and switched to double bass.[1] In the second half of the 1940s he played with Joe Mooney, Tony Scott, and Cy Coleman. Later, he played with the Sauter-Finegan Orchestra, Tal Farlow, Marian McPartland, Don Elliott, Vic Dickenson, Gil Mellé, Bucky Pizzarelli, John Mehegan, Chris Connor, Eddie Costa, and Bobby Hackett. He led his own band in 1956 and led small combos into the 1980s.

This article uses material from the article Vinnie Burke from the free encyclopedia Wikipedia and it is licensed under the GNU Free Documentation License.

Teddy's Tune Eric Reed Trio
Update Required To play the media you will need to either update your browser to a recent version or update your Flash plugin.