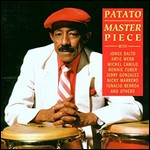 Carlos Valdes (November 4, 1926 – December 4, 2007) was a Cuban-born American conga player.[1] In 1955 he emigrated from Cuba to New York City[2][3] where he played with Willie Bobo in Harlem.[4] He was also known by the name "Patato".[5] He invented and patented the tunable conga drum (earlier drums had nailed heads) which revolutionized use of the instrument. Tito Puente called him "the greatest conguero alive today".[6]

Since the 1950s Patato was among the congueros that are in highest demand in the Latin Music and jazz world. He played, toured and recorded together with singer Miguelito Valdés, Perez Prado, Beny Moré, Cachao López, with Tito Puente, Machito, Herbie Mann, Kenny Dorham, Cal Tjader, Art Blakey, Elvin Jones and other, also with Dizzy Gillespie and Quincy Jones, accompanying both on extended tours throughout Europe, and with the late Mario Bauza. Patato acted in and composed the title song of The Bill Cosby Show. In 1991 he contributed to the movie soundtrack for The Mambo Kings Play Songs of Love. Patato was the leader of his own band 'Afrojazzia', which toured Europe in the spring of 1994.

A lifetime smoker, Patato had emphysema and died of respiratory failure in Cleveland, Ohio on December 4, 2007.[7]

For over 60 years Carlos "Patato" Valdez demonstrated how a musician could combine technical skill with superb showmanship. His conga playing demonstrated the fusing of melody and rhythm, and his keen understanding of rhythm is rooted in dancing. Patato even mastered the art of actually dancing ON TOP of his congas during his performances, to the delight of the audience.

Valdes dazzled an audience well into his seventies with his rumba moves. He's also is the man who gave Brigitte Bardot a mambo lesson in the film And God Created Woman. Valdez also expressed his understanding of melody through bass and tres, the Cuban folk guitar.

During the late 1940s he helped develop the first tunable congas, as earlier models were tuned by the unwieldy method of heating them with a sterno can. His interest in design, as well as his friendship with LP Founder Martin Cohen, led to the development of the LP Patato Model Congas, one of the top-selling conga drums of all time.

This article uses material from the article Carlos Valdes from the free encyclopedia Wikipedia and it is licensed under the GNU Free Documentation License.

The Nearness Of You Alexia Gardner & Offbeat Trio
Update Required To play the media you will need to either update your browser to a recent version or update your Flash plugin.