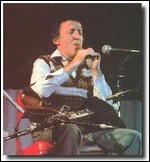 Paddy Moloney (Irish: Pádraig Ó Maoldomhnaigh; born 1 August 1938) is the founder and leader of the Irish musical group The Chieftains[1] and has played on every one of their albums.

He was born in Donnycarney in Dublin. His mother bought him a tin whistle when he was six and at the age of eight he started to learn the Uilleann pipes. He also plays button accordion and bodhrán. In the late 1950s he met Seán Ó Riada and joined his group Ceoltóirí Chualann in the early 1960s. Together with Garech de Brun (anglicised to Garech Browne) of Luggala, he founded Claddagh Records in 1959. In 1968 he became a producer for the label and supervised the recording of 45 albums.

He has done session work for Mike Oldfield, The Muppets, Mick Jagger,[2] Paul McCartney, Sting and Stevie Wonder. He is the primary composer and arranger of much of the Chieftains' music, and has composed for films including Treasure Island, The Grey Fox, Braveheart, and Gangs of New York.

This article uses material from the article Paddy Moloney from the free encyclopedia Wikipedia and it is licensed under the GNU Free Documentation License.

Visa fran Utanmyra Etymon
Update Required To play the media you will need to either update your browser to a recent version or update your Flash plugin.