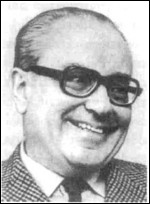 Alberto Evaristo Ginastera (Spanish pronunciation: [alerto eaisto xinastea]; April 11, 1916June 25, 1983) was an Argentine composer of classical music. He is considered one of the most important 20th-century classical composers of the Americas.[1]

Ginastera was born in Buenos Aires to a Catalan father and an Italian mother. During the last few years of his life, he preferred to pronounce his surname in its Catalan pronunciation, with a soft 'G' as in 'George' (IPA: [(d)inastea]) rather than a Spanish 'J' sound (Spanish pronunciation: [xinastea]).[2] In fact this would be the local Argentine pronunciation of his name if it were spelled Yinastera or Llinastera.[3]

Ginastera studied at the conservatory in Buenos Aires, graduating in 1938. As a young professor, he taught at the Liceo Militar General San Martín. After a visit to the United States in 194547, where he studied with Aaron Copland at Tanglewood, he returned to Buenos Aires and co-founded the League of Composers. He held a number of teaching posts.

Ginastera moved back to the United States in 1968 and then in 1970 to Europe. He died in Geneva, Switzerland, at the age of 67 and was buried in the Cimetière des Rois there.

Among his notable students were Ástor Piazzolla (who studied with him in 1941), Alcides Lanza, Waldo de los Ríos, Jacqueline Nova and Rafael Aponte-Ledée.

Much of Ginastera's works were inspired by the Gauchesco tradition. This tradition holds that the Gaucho, or landless native horseman of the plains, is a symbol of Argentina.[4]

The progressive rock group Emerson, Lake & Palmer brought Ginastera attention outside of modern classical music circles when they adapted the fourth movement of his first piano concerto and recorded it on their popular album Brain Salad Surgery under the title "Toccata". They recorded the piece not only with Ginastera's permission, but with his endorsement. In 1973, when they were recording the album, Keith Emerson met with Ginastera at his home in Switzerland and played a recording of his arrangement for him. Ginastera is reported to have said, "Diabolico!". Emerson misunderstood Ginastera's meaning: Ginastera spoke almost no English and meant that their interpretation was frightening, which had been his intent when he wrote it; Emerson, being British, took it to mean "awful". Emerson was so upset that he was prepared to scrap the piece until Ginastera's wife intervened saying that he approved. Ginastera later said, "You have captured the essence of my music, and no one's ever done that before." This experience is detailed in the liner notes to Brain Salad Surgery. Emerson would later go on to release an adaptation of one of the pieces from Ginastera's Suite de Danzas Criollas entitled "Creole Dance". "Toccata" also gained fame as the theme to the New England cult TV show Creature Double Feature. Italian neo-classical electric guitarist Alex Masi has also recorded an adaptation of "Toccata," one strongly based on the aforementioned ELP version, rather than the original orchestral piece. It can be found on 1989's "Attack of the Neon Shark".

His Cantata para América Mágica (1960), for dramatic soprano and 53 percussion instruments, was based on ancient pre-Columbian legends. Its West Coast premiere was performed by the Los Angeles Percussion Ensemble under Henri Temianka and William Kraft at UCLA in 1963.

Works withdrawn by the composer (without opus number)

This article uses material from the article Alberto Ginastera from the free encyclopedia Wikipedia and it is licensed under the GNU Free Documentation License.