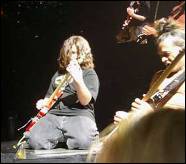 Michael Anthony Sobolewski (born June 20, 1954), known professionally as Michael Anthony, is an American[1] musician who is currently the bass player in the rock group Chickenfoot. Anthony is best known as the former bass player for the hard rock band Van Halen.

Anthony is known for his stage antics, his effects-laden live solos, his number of custom-made bass guitars including a Jack Daniel's model shaped like a whiskey bottle, and his background vocals in Van Halen. He also has a signature Yamaha bass guitar series. In total, Anthony is known to have in excess of 150 bass guitars. In addition to his musical career with Van Halen and other acts, Anthony markets a line of hot sauces and related products named Mad Anthony.

While Anthony was a promising catcher in baseball, he also competed on the Dana Junior High School track team (long jump) and played in the marching band there from 1967–1969. He took an interest in guitar as a teenager, but picked up the bass instead since most of his other friends already played guitar or drums. Anthony's friend Mike Hershey gave him a Fender Mustang electric guitar that Anthony converted by removing its top two strings and playing it as a bass guitar. Eventually, his father bought him a Victoria copy of a Fender Precision Bass and a Gibson amplifier. Anthony modeled his bass playing after Jack Bruce of Cream mostly, but also admired Led Zeppelin's John Paul Jones and Harvey Brooks of Electric Flag. His first band was called Poverty's Children. Other bands he played in included Black Opal, Balls, and Snake. Although Anthony is naturally left-handed, he plays right-handed.

Snake, a three-piece group featuring Anthony on lead vocals and bass guitar, was the last band Anthony played in before joining Van Halen. Snake played covers of ZZ Top, Lynyrd Skynyrd, and Foghat, along with some original songs. They played a lot of the same types of gigs as did the Van Halen brothers' band Mammoth. Snake even opened for Mammoth at a show at Pasadena High School one night. Mammoth's PA failed that night, so Anthony lent them Snake's PA.

While attending Pasadena City College, Anthony pursued a degree in music. Eddie Van Halen took classes there too and they would often see each other on campus. During this time, bass player Mark Stone parted ways with Mammoth and the Van Halens decided to audition Anthony as a replacement. Anthony was impressed by their skill during subsequent jam sessions even though he had seen the brothers play before. After the session, the Van Halen brothers asked Anthony to join their band. One story claims that he said he had to think about it and consulted Snake guitarist Tony Caggiano who advised Anthony to go ahead with joining Van Halen. However, according to Michael Anthony's web site, when asked if he wanted to join Mammoth, Anthony immediately said yes. This has become the accepted version of events.

In 1974, Eddie Van Halen, Alex Van Halen, David Lee Roth and Anthony became known as Van Halen, dropping the name Mammoth when they discovered another local band using that moniker. They were signed to Warner Brothers in 1977 and released their self titled debut album on February 8, 1978. Anthony's high vocal harmonies became a distinctive part of the Van Halen sound. The band released a total of ten studio albums from 1978–1995 and a live album in 1993. There were also two compilations released, with a combined total of five new songs, during Anthony's tenure with the band.

During his time in Van Halen, Anthony also collaborated with his brother Robert Lee Sobolewski, producing a 1988 demo for Robert's band Asylum Suite, which was formed in 1984 which also featured singer Michael Thomas Fiore. The Asylum Suite demo produced by Anthony featured songs such as The Dog, You're the One and Fireline.[2]

Anthony has been married to his wife Sue since 1981. Both attended Arcadia High School[3] and they have two daughters: Elisha (born 1985) and Taylor (born 1992). Anthony and his family reside in Newport Beach, California.

As early as 1996, rumors periodically surfaced that Anthony had been fired from Van Halen. Despite claims to the contrary, he continued work with the band. These rumors persisted until his final departure after the 2004 reunion tour with Hagar.

Anthony's involvement in recording the 1998 album Van Halen III was dramatically less than previous albums. Anthony played bass on only three songs. Eddie Van Halen recorded bass parts for all the other songs. Anthony is credited as a songwriter for the album along with the rest of the band as is always the case for Van Halen albums. Anthony performed with the band for the 1998 tour, and was credited for messages from the band thereafter. He participated in the band's three reunion attempts with David Lee Roth in 2000 and 2001. Anthony's name was also credited in a few band newsletters and appeared in band interviews during this time. Sometime after this, however, Anthony disappeared from public view until the 2004 reunion.

In interviews, Eddie and Alex Van Halen suggested they were jamming and writing/recording new material during this time period but appeared to be working without Anthony.

Anthony began periodic appearances with Sammy Hagar during his solo tours. He usually played as part of both The Waboritas and Los Tres Gusanos, two of Sammy Hagar's bands. During 2002's David Lee Roth/Sammy Hagar tour, both Michael Anthony and ex-Van Halen vocalist Gary Cherone made guest appearances at concerts, sometimes together.

In 2002, Anthony, Hagar, Neal Schon, Deen Castronovo, and Joe Satriani formed the "supergroup" Planet Us and Anthony began making more frequent performances at Sammy Hagar concerts. Planet Us recorded two songs, including "Psycho Vertigo," which was intended for the original Spider-Man soundtrack but ultimately did not make the album. That and the other Planet Us song written for the band, "Peephole," were later released on the 2008 Sammy Hagar solo album Cosmic Universal Fashion.

Initially when Eddie and Alex asked Hagar to rejoin at the end of 2003 for a 2004 tour, the plan was not to invite Anthony back. Hagar, however, refused to perform if Anthony did not rejoin, and Anthony agreed to play but on a reduced royalties contract. The contract drawn up was for the duration of the tour only, with his role within the band resting in the hands of the Van Halen brothers thereafter. Throughout this time, and during the Van Halen III period, the public was unaware of Anthony's tenuous status within the band and was led to believe that he was still a full-time member.

In 2004, Van Halen released the compilation album The Best of Both Worlds which included three new songs. Anthony did not participate in the writing or play bass on the new songs and was not credited on the album for the new material[4] (Anthony did sing backup vocals on all three tracks).

Anthony now states in media interviews that he has not spoken to the Van Halen brothers since the 2004 tour (except to Alex Van Halen at Van Halen drum-tech Greg Emerson's funeral). He has also speculated that since the brothers were not pleased with Hagar's commercial ventures such as the Cabo Wabo product line, their similar displeasure with Anthony's hot sauce brand may have caused the rift that ultimately separated Hagar and Anthony from the band.[5]

(2006–present) Departure from Van Halen and formation of Chickenfoot

On September 8, 2006, Eddie Van Halen announced that his son Wolfgang was replacing Michael Anthony as Van Halen's bass player. On February 2, 2007, Van Halen announced that they were reuniting for a tour with original vocalist David Lee Roth. Their tour began on September 27, 2007. Anthony commented that he heard about his replacement "on the Internet" and added, "I'm a little miffed that they're calling it a Van Halen reunion. If I was dead and they needed someone to play, that's one thing, but to me this is not a reunion."[6] At the tour press conference David Lee Roth stated "this is not a reunion, this is a reformation".

Anthony joined his former bandmate Sammy Hagar on live national TV on February 25, 2007. During a pre-race performance for the California NASCAR race on Fox television, the bassist jumped onstage and joined Sammy Hagar during a performance of "I Can't Drive 55."

Michael Anthony and Sammy Hagar were the only members, former or current, to appear at Van Halen's induction into the Rock and Roll Hall of Fame on March 12, 2007. Eddie Van Halen was in rehab at the time, and Alex Van Halen and David Lee Roth declined to appear.[7]

Anthony is a founding member and the bassist and backing vocalist for the band Chickenfoot with Sammy Hagar, Red Hot Chili Peppers drummer Chad Smith and guitarist Joe Satriani. The band released their first studio album in Europe on June 5, 2009, followed by the North American release on June 9. The world tour officially started May 14, 2009, in Seattle, Washington at El Corazon. Anthony has stated that this group intends to continue with further albums and possible tours. Chickenfoot released their sophomore effort, Chickenfoot III on September 27, 2011.

Anthony maintains a personal website titled "Mad Anthony Cafe" where he markets and sells a number of signature products including hot sauce, BBQ sauce, and hot mustard. His line of commercial foods is the result of a collaboration with a San Diego, California restaurant noted for its hot sauces. His hot sauce brand, "Mad Anthony", has been noted on local news segments and on the Food Network for being "high-end" due to the quality of its ingredients and manufacturing process.[8] The site also provides information on Anthony's two signature Yamaha bass guitars. Chickenfoot bandmate Sammy Hagar carries the bassist's hot sauces at his Sammy's Beach Bar & Grills locations.[9]

Anthony has wanted to expand the number of outlets his sauces reach, and in order to do that he has had to make some changes to the packaging. His hot sauce includes the phrase: So hot youll need two assholes. In a 2010 interview, Anthony said, "I thought was kind of witty. But unfortunately places like Trader Joes [and bigger outlets] take a look at the bottle and go, 'No, I dont think were going to go for that.' So were in the process of revamping that. Its actually only on the one bottle of my hot sauce. On my barbecue sauce or my mustard we didnt use any of that kind of language. Im not going to do the full-on blowout thing, but it would be cool to expand a little bit more because Ive got people that work with companies like Trader Joes, which is a big specialty store, and theyre interested in doing something."[9]

This article uses material from the article Michael Anthony (musician) from the free encyclopedia Wikipedia and it is licensed under the GNU Free Documentation License.