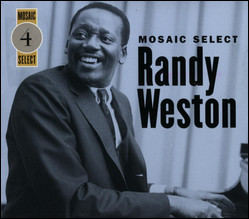 Randy Weston (born April 6, 1926, in Brooklyn, New York) is an American jazz pianist and composer of Jamaican parentage.[1] He was described by Marian McPartland as "one of the world's great visionary pianists and composers".[2]

Weston's piano style owes much to Duke Ellington and Thelonious Monk (he has paid direct tribute to both on his "Portraits" albums), but it is highly distinctive in its qualities: percussive, highly rhythmic, capable of producing a wide variety of moods.[3]

Also been characterized as a "griot of jazz and its African roots", Weston has said: "It's so important to teach the history of our music and the origins of our music, which comes directly from the African continent.... Musicians have to be historians, too."[4] Described as "America's African Musical Ambassador", he has said: "What I do I do because it's about teaching and informing everyone about our most natural cultural phenomenon. It's really about Africa and her music."[5]

Randolph Edward Weston was born in 1926 to Vivian (née Moore) and Frank Weston, and was raised in Brooklyn, New York, where his father owned a restaurant.[6] His mother was from Virginia and his father was of Jamaican-Panamanian descent, a staunch Garveyite, who passed on the Pan-Africanist leader's Afrocentric, self-reliant values to his son.[7][8] Randy studied classical piano as a child and also took dance lessons.[9] He graduated from Boys High School in Bedford-Stuyvesant; his father chose for him to attend there because it had a reputation for high standards. He took piano lessons from Professor Atwell, because unlike his former piano teachers, Atwell allowed him to play songs outside of the classical music repertoire.[10]

After serving in the U.S. Army during World War II, Weston ran a restaurant that was frequented by many of the leading bebop musicians. Among his piano heroes are Count Basie, Nat King Cole, Art Tatum and Duke Ellington (and Wynton Kelly was a cousin), but it was Thelonious Monk who had the greatest impact.

In the late 1940s Weston began gigging with bands including Bullmoose Jackson, Frank Culley and Eddie "Cleanhead" Vinson. Weston worked with Kenny Dorham in 1953 and in 1954 with Cecil Payne, before forming his own trio and quartet and releasing his debut recording as a leader in 1954, Cole Porter in a Modern Mood. He was voted New Star Pianist in Down Beat magazine's International Critics' Poll of 1955. Several fine albums followed, with the best being Little Niles near the end of that decade. Melba Liston provided excellent arrangements for a sextet playing several of Weston's best compositions: the title track, "Earth Birth", "Babe's Blues", and others.

In the 1960s, Weston's music prominently incorporated African elements, as shown on the large-scale suite Uhuru Afrika (1960, with the participation of poet Langston Hughes) and Highlife (full title: Music from the New African Nations featuring the Highlife), the latter recorded in 1963, two years after Weston traveled for the first time to Africa, as part of a U.S. cultural delegation to Lagos, Nigeria.[11] On both these albums he teamed up with the arranger Melba Liston. In addition, during these years his band often featured the tenor saxophonist Booker Ervin. He covered the Nigerian Bobby Benson's piece "Niger Mambo", which included Caribbean and jazz elements within a Highlife style. Weston has recorded this number many times throughout his career.[12]

In 1967 Weston traveled throughout Africa with a U.S. cultural delegation. The last stop of the tour was Morocco, where he decided to settle, running his African Rhythms Club in Tangier[13] for five years, from 1967 to 1972. He has said, "We had everything in there from Chicago blues singers to singers from the Congo.... The whole idea was to trace African people wherever we are and what we do with music."[14]

In 1972 he produced Blue Moses for the CTI Records, a best-selling record on which he plays electric keyboard. In the summer of 1975, he played at the Festival of Tabarka in Tunisia, North Africa (later known as the Tabarka Jazz Festival), accompanied by his son Azzedin Weston on percussion, with other notable acts including Dizzy Gillespie.

For a long stretch Weston recorded infrequently on smaller record labels. He also made a two-CD recording The Spirits of Our Ancestors (recorded 1991; released 1992), which featured arrangements by his long-time collaborator Melba Liston. The album contained new, expanded versions of many of his well-known pieces and featured an ensemble including some African musicians, with guests such as Dizzy Gillespie and Pharoah Sanders also contributing. The music director was saxophonist Talib Kibwe (also known as T. K. Blue), who continues in that role to the present day.[15]

Weston later produced a series of albums in a variety of formats: solo, trio, mid-sized groups, and collaborations with the Gnawa musicians of Morocco. Weston's best-known compositions include "Hi-Fly" (which he has said was inspired by his experience of being 6' 8" and looking down at the ground), "Little Niles" (named for his son, later known as Azzedine), "African Sunrise", "Blue Moses", "The Healers" and "Berkshire Blues". Regarded as jazz standards, they have frequently been recorded by other prominent musicians.

After more than five decades devoted to music, Weston continues to perform throughout the Americas, Africa, Asia, the Caribbean, and Europe. In 2002 he performed with bassist James Lewis for the inauguration of the Bibliotheca Alexandrina in Alexandria, Egypt. That same year he performed with Gnawa musicians at Canterbury Cathedral at the invitation of the Archbishop of Canterbury.[16][17] Weston also played at the Kamigamo Shrine in Japan in 2005.

On June 21, 2009, he featured in a memorial held at the Jazz Gallery in New York for Ghanaian master drummer Kofi Ghanaba,[18] whose composition "Love, the Mystery Of..." Weston has used as his theme for some 40 years.[19]

In 2013, Sunnyside Records released Weston's album The Roots of the Blues, a duo session with tenor saxophonist Billy Harper. On November 17, 2014, as part of the London Jazz Festival, Weston played a duo concert with Harper at the Queen Elizabeth Hall. Kevin Le Gendre in his review said the two musicians reached "the kind of advanced conversational intimacy only master players achieve".[20]

In 2015 Weston was artist-in-residence at The New School in New York, participating in a lecture series and mentoring students in the School of Jazz, as well as performing.[4]

Weston's most recent release is An African Nubian Suite (2017), a two-CD recording of a sold-out concert at the Institute of African American Affairs of New York University on April 8, 2012, Easter Sunday, featuring an international cast of performers including Cecil Bridgewater, Robert Trowers, Howard Johnson, T. K. Blue, Billy Harper, Alex Blake, Lewis Nash, Candido, Ayodele Maakheru, Lhoussine Bouhamidy, Saliou Souso, Martin Kwaku Obeng, Min Xiao-Fen, Tanpani Demda Cissoko, Neil Clarke and Ayanda Clarke, and the late poet Jayne Cortez.[36][37] Describing it as an "epic work", the Black Grooves reviewer wrote that The African Nubian Suite "traces the history of the human race through music, with a narration by inspirational speaker Wayne B. Chandler, and introductions and stories by Weston in his role as griot.... Stressing the unity of humankind, Weston incorporates music that 'stretches across millennia'—from the Nubian region along the Nile Delta, to the holy city of Touba in Senegal, to China’s Shang Dynasty, as well as African folk music and African American blues.... In these troubling times when our nation is divided by politics, race and religion, Weston uses The African Nubian Suite as a vehicle to remind us of our common heritage: 'We all come from the same place – we all come from Africa.' As eloquently stated by Robin D.G. Kelley in the liner notes: 'There are no superior or inferior races, no hierarchies of culture, no barbarians at the gate. Instead, Africa—its music, land, people, spirituality—tie us all together as a planet.'"[38]

Weston has been the recipient of many international awards, including:

In October 2010, Duke University Press published African Rhythms: The Autobiography of Randy Weston, "composed by Randy Weston, arranged by Willard Jenkins". It was hailed as "an important addition to the jazz historiography and a long anticipated read for fans of this giant of African American music, aka jazz."[52] Reviewer Larry Reni Thomas wrote: "Randy Weston’s long-anticipated, much-talked-about, consciousness-raising, African-centered autobiography, African Rhythms, is a serious breath of fresh air and is a much-needed antidote in this world of mediocre musicians, and men. He takes the reader on a wonderful, exciting journey from America to Africa and back with the ease of a person who loved every minute of it. The book is hard to put down and is an engaging, pleasing literary work that is worthy of being required reading in any history or literature school course."[53]

In 2015–16, Weston's archives were acquired by the Jazz Research Initiative in collaboration with the Hutchins Center, Loeb Music Library, the Harvard College Library, and the Dean of the Faculty of Arts and Sciences.[54] The Randy Weston Collection comprises hundreds of manuscripts, scores, videos, films, photographs, and more than 1,000 tape recordings, and among its highlights are correspondence with Langston Hughes and Alvin Ailey; photographs with Dizzy Gillespie, Pharoah Sanders, Muhammad Ali, and Cornel West; and records of his African Rhythms Club in Tangier, Morocco, from 1967 to 1972.[54]

This article uses material from the article Randy Weston from the free encyclopedia Wikipedia and it is licensed under the GNU Free Documentation License.