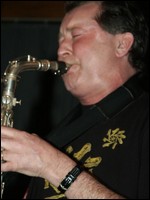 Samuel 'Sammy' Rimington (born April 29, 1942, in Paddock Wood, Kent), is an English jazz reed player. He has been an active New Orleans jazz revivalist since the late 1950s.

Rimington played with Barry Martyn in 1959. He started to become a professional musician in 1960 when he joined the band of Ken Colyer. He stayed with Ken Colyer until 1965. That year he moved to the United States, and worked with Big Bill Bissonnette's Easy Rider Jazz Band and the very famous December Band. He made some jazz fusion recordings early in the 1970s, but most of his work has been in the New Orleans jazz vein, playing with Louis Nelson, Big Jim Robinson, Chris Barber, Kid Thomas Valentine, Captain John Handy, and others. He has recorded extensively as a bandleader since the early 1960s. Sammy Rimington's main influences were George Lewis on clarinet and Captain John Handy on altosax.

Since 1982 Sammy Rimington has once a year given a concert at Floda Church near the town Katrineholm in Sweden. In the beginning, he was invited by the priest Lars "Sumpen" Sundbom, who was himself a jazz musician. Sammy frequently recorded with and was accompanied on tours by the pianist Jon Marks.

In 2010 Sammy has been doing gigs with heavy metal/fusion/jazz drummer Anders Johansson from HammerFall/Yngwie Malmsteen fame.

This article uses material from the article Sammy Rimington from the free encyclopedia Wikipedia and it is licensed under the GNU Free Documentation License.

Lover Come Back To Me Adrienne West & Dado Moroni Trio
Update Required To play the media you will need to either update your browser to a recent version or update your Flash plugin.