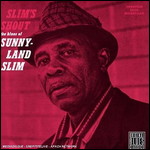 Albert Luandrew (September 5, 1906 – March 17, 1995),[1] known as Sunnyland Slim, was an American blues pianist who was born in the Mississippi Delta and moved to Chicago, helping to make that city a center of postwar blues.[2] The Chicago broadcaster and writer Studs Terkel said Sunnyland Slim was "a living piece of our folk history, gallantly and eloquently carrying on in the old tradition."[3]

Sunnyland Slim was born on a farm in Quitman County, near Vance, Mississippi.[1][3] He moved to Memphis, Tennessee, in 1925, where he performed with many of the popular blues musicians of the day. His stage name came from the song "Sunnyland Train", about a railroad line between Memphis and St. Louis, Missouri.[3] In 1942 he moved to Chicago, in the great migration of southern workers to the industrial north.

At that time the electric blues was taking shape in Chicago, and through the years Sunnyland Slim played with such musicians as Muddy Waters, Howlin' Wolf,[4] Robert Lockwood, Jr., and Little Walter.[3] His piano style is characterised by heavy basses or vamping chords with the left hand and tremolos with the right. His voice was loud, and he sang in a declamatory style.[5]

Sunnyland Slim's first recording was as a singer with Jump Jackson's band for Specialty Records in September 1946. His first recordings as a leader were for Hy-Tone Records and Aristocrat Records in late 1947.[6] He continued performing until his death, in 1995.

In the late 1960s, Slim became friends with members of the band Canned Heat and played piano on the track "Turpentine Moan" on their album Boogie with Canned Heat. In turn, members of the band—lead guitarist Henry Vestine, slide guitarist Alan Wilson and bassist Larry Taylor—contributed to Sunnyland Slim's Liberty Records album Slim's Got His Thing Goin' On (1968), which also featured Mick Taylor.

In 1988 Sunnyland Slim was awarded a National Heritage Fellowship.[3]

He died in March 1995 in Chicago, after complications from renal failure, at the age of 88.[7]

This article uses material from the article Sunnyland Slim from the free encyclopedia Wikipedia and it is licensed under the GNU Free Documentation License.

Bring It Back Ballroom Shakers
Update Required To play the media you will need to either update your browser to a recent version or update your Flash plugin.