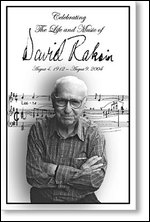 David Raksin (August 4, 1912 – August 9, 2004) was an American composer who was renowned for his work in film and television. With over 100 film scores and 300 television scores to his credit, he became known as the "Grandfather of Film Music."[1]

David Raksin was born in Philadelphia, Pennsylvania in 1912. His father was an orchestra conductor. Raksin played professionally in dance bands while attending Central High School of Philadelphia. He went on to study composition with Harl McDonald at the University of Pennsylvania and later with Isadore Freed in New York and Arnold Schoenberg in Los Angeles. In New York Raksin worked as an arranger for Harms/Chappell.

One of his earliest film assignments was as assistant to Charlie Chaplin in the composition of the score to Modern Times (1936). He is perhaps best remembered for his score for the film Laura (1944). The theme music for the film, "Laura", with the addition of lyrics by Johnny Mercer, became a major hit. During Raksin's lifetime, "Laura" was said to be the second most-recorded song in history following "Stardust" by Hoagy Carmichael and Mitchell Parish.

Raksin's theme song "The Bad and the Beautiful" (also called "Love is For the Very Young") for the 1953 film The Bad and the Beautiful (1953) was also a hit, although not as popular as "Laura". Raksin insisted that the song be released as an instrumental because he had resented having to split the proceeds from "Laura" with a lyricist. Raksin's theme for "The Bad and the Beautiful" was initially disliked by the film's director Vincente Minnelli and producer John Houseman, but was saved from rejection by the intervention of Adolph Green and Betty Comden, who both liked it. The theme has since been praised by Stephen Sondheim, Leonard Rosenman, Richard Rodney Bennett, and Alexander Courage. Sondheim reportedly called it "one of the best themes ever written in films".

Raksin died in 2004, aged 92. At the time of his death, it was announced that Raksin had completed his autobiography, titled If I Say So Myself.[2] The book was eventually published under the title The Bad and the Beautiful: My Life in a Golden Age of Film Music.

In 2012, he was named for a Lifetime Achievement Award for a Past Film Composer.[3]

His son Alex is a Pulitzer Prize winning editorial writer for the Los Angeles Times.[4]

This article uses material from the article David Raksin from the free encyclopedia Wikipedia and it is licensed under the GNU Free Documentation License.

One Note Samba Alexia Gardner
Update Required To play the media you will need to either update your browser to a recent version or update your Flash plugin.