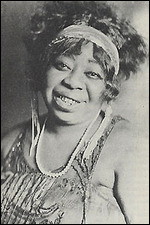 "Ma" Rainey (born Gertrude Pridgett, September 1882[1] or April 26, 1886 – December 22, 1939)[2] was one of the earliest African-American professional blues singers and one of the first generation of blues singers to record.[3] She was billed as the "Mother of the Blues".

Rainey was known for her powerful vocal abilities, energetic disposition, majestic phrasing, and a "moaning" style of singing. Her powerful voice was never adequately captured on her records, because she recorded exclusively for Paramount, which was known for its below-average recording techniques and poor shellac quality. However, her other qualities are present and most evident in her early recordings "Bo-Weevil Blues" and "Moonshine Blues".

Rainey recorded with Louis Armstrong, and she toured and recorded with the Georgia Jazz Band. She continued to tour until 1935, when she retired and went to live in her hometown.[2]

Pridgett claimed to have been born on April 26, 1886 (beginning with the 1910 census, taken April 25, 1910), in Columbus, Georgia.[5] However, the 1900 census indicates she was born in September 1882 in Alabama, and researchers Bob Eagle and Eric LeBlanc suggest that her birthplace was in Russell County, Alabama.[1][6] She was the second of five children of Thomas and Ella (née Allen) Pridgett, from Alabama. She had at least two brothers and a sister, Malissa, with whom Gertrude was later confused by some writers.[5]

She began her career as a performer at a talent show in Columbus, Georgia, when she was about 12 to 14 years old.[2][7] A member of the First African Baptist Church, she began performing in black minstrel shows. She later claimed that she was first exposed to blues music around 1902. She formed the Alabama Fun Makers Company with her husband, Will Rainey, but in 1906 they both joined Pat Chappelle's much larger and more popular Rabbit's Foot Company, in which they were billed together as "Black Face Song and Dance Comedians, Jubilee Singers [and] Cake Walkers".[8] In 1910, she was described as "Mrs. Gertrude Rainey, our coon shouter".[8] She continued with the Rabbit's Foot Company after it was taken over by a new owner, F. S. Wolcott, in 1912.[2]

Beginning in 1914, the Raineys were billed as Rainey and Rainey, Assassinators of the Blues. Wintering in New Orleans, she met numerous musicians, including Joe "King" Oliver, Louis Armstrong, Sidney Bechet and Pops Foster. As the popularity of blues music increased, she became well known.[9] Around this time, she met Bessie Smith, a young blues singer who was also making a name for herself.[A] A story later developed that Rainey kidnapped Smith, forced her to join the Rabbit's Foot Minstrels, and taught her to sing the blues; the story was disputed by Smith's sister-in-law Maud Smith.[10]

From the late 1910s, there was an increasing demand for recordings by black musicians.[11] In 1920, Mamie Smith was the first black woman to be recorded.[12] In 1923, Rainey was discovered by Paramount Records producer J. Mayo Williams. She signed a recording contract with Paramount, and in December she made her first eight recordings in Chicago,[13] including "Bad Luck Blues", "Bo-Weevil Blues" and "Moonshine Blues". She made more than 100 other recordings over the next five years, which brought her fame beyond the South.[2][14] Paramount marketed her extensively, calling her the "Mother of the Blues", the "Songbird of the South", the "Gold-Neck Woman of the Blues" and the "Paramount Wildcat".[15]

In 1924 she made some recordings with Louis Armstrong, including "Jelly Bean Blues", "Countin' the Blues" and "See, See Rider".[16] In the same year she embarked on a tour of the Theater Owners Booking Association (TOBA) in the South and Midwest of the United States, singing for black and white audiences.[17] She was accompanied by the bandleader and pianist Thomas Dorsey and the band he assembled, the Wildcats Jazz Band.[18] They began their tour with an appearance in Chicago in April 1924 and continued, on and off, until 1928.[19] Dorsey left the group in 1926 because of ill health and was replaced as pianist by Lillian Hardaway Henderson, the wife of Rainey's cornetist Fuller Henderson, who became the band's leader.[20]

Although most of Rainey's songs that mention sexuality refer to love affairs with men, some of her lyrics contain references to lesbianism or bisexuality,[21] such as the 1928 song "Prove It on Me":

They said I do it, ain't nobody caught me.
Sure got to prove it on me.
Went out last night with a crowd of my friends.
They must've been women, 'cause I don't like no men.[22]

Towards the end of the 1920s, live vaudeville went into decline, being replaced by radio and recordings.[20] Rainey's career was not immediately affected; she continued recording for Paramount and earned enough money from touring to buy a bus with her name on it.[26] In 1928, she worked with Dorsey again and recorded 20 songs, before Paramount terminated her contract.[27] Her style of blues was no longer considered fashionable by the label.[28]

Bob Dylan referred to Rainey in the song "Tombstone Blues" on his 1965 album Highway 61 Revisited, pairing her with Beethoven, perhaps as symbols of great art, a compliment to Rainey's stature as an artist ("where Ma Rainey and Beethoven once unwrapped their bedroll").

In 1981 Sandra Lieb wrote the first full-length book about Rainey, Mother of the Blues: A Study of Ma Rainey.

Ma Rainey's Black Bottom, a 1982 play by August Wilson, is a fictionalized account of the recording of her song of the same title in December 1927.

Sterling A. Brown wrote a poem, "Ma Rainey", in 1932, about how "When Ma Rainey / comes to town" people everywhere would hear her sing.

In 1994, the U.S. Post Office issued a 29-cent commemorative postage stamp honoring her.

The first annual Ma Rainey Blues Festival will be held in April 2016 in Columbus, Georgia, near the home that Rainey owned and lived in at the time of her death.

This sortable table presents all 94 titles recorded by Rainey.[34]

This article uses material from the article Ma Rainey from the free encyclopedia Wikipedia and it is licensed under the GNU Free Documentation License.