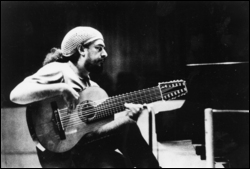 Gismonti was born in the small city of Carmo, state of Rio de Janeiro, Brazil, into a musical family. His mother was from Sicily and his father was from Beirut, Lebanon. At the age of six, he started studying the piano at the Brazilian Conservatory of Music. After studying the classical repertoire in Brazil for fifteen years, he went to Paris to delve into modern music. He studied with Nadia Boulanger (1887–1979), after acceptance as a student by the composer Jean Barraqué, a student of Anton Webern and Schoenberg. Boulanger encouraged Gismonti to write the collective Brazilian experience into his music.[2]

Gismonti is a self-taught guitarist and after returning to Brazil, he designed guitars with more than six strings, expanding the possibilities of the instrument. Approaching the fretboard as if it were a keyboard, Gismonti gives the impression that there is more than a single guitar player. Gismonti's sojourn in the Xingu region of the Amazon basin made a lasting impression. This is documented musically in tunes like "Yualapeti" and "Sapain" (Yualapeti shaman, Sapain) and in the recordings Dança das Cabeças (Dance of the Heads, 1977), Sol do Meio-Dia (Noon Sun, 1978), which he dedicated to the Xingu, and Duas Vozes (Two Voices, 1984).[3]

The musical career of Gismonti spans five decades. The major phases are distinguished by record company, the ensemble format, and the musical collaborators. The most important ensembles are his Brazilian group Academia de Danças, including Mauro Senise (saxophone and flutes), Zeca Assumpção (bass) and Nenê (Realcino Lima Filho, drums and percussion), the duo with Naná Vasconcelos (percussion), and the trio with Charlie Haden (bass) and Jan Garbarek (saxophone). Dança das Cabecas, the first ECM record, was nominated 'Album of the Year' by Stereo Review and received the 1977 Großer Deutscher Schallplattenpreis.[4]

This article uses material from the article Egberto Gismonti from the free encyclopedia Wikipedia and it is licensed under the GNU Free Documentation License.