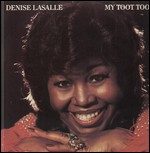 Ora Denise Allen (born July 16, 1939, Belzoni, Mississippi, United States),[1] known by the stage name Denise LaSalle, is an American blues and R&B/soul singer, songwriter, and record producer. LaSalle, who maintains an enormous following in the Deep South, has been recognized as a Queen of the Blues.

Born near Sidon, Mississippi[2] and raised in Belzoni, she sang in church choirs before moving to Chicago in the early 1960s. She sat in with R&B musicians and wrote songs, influenced by country music as well as the blues, before winning a recording contract with Chess Records in 1967. Her first single, "A Love Reputation" was a modest regional hit.[3]

She established an independent production company, Crajon, with her then husband Bill Jones.[3] Her song "Trapped By A Thing Called Love" (1971) was released on Detroit-based Westbound Records. This reached #1 on the national R&B chart and #13 on the Billboard Hot 100 chart. The song ranked at #85 on the 1971 year-end chart. The RIAA gold disc award was made on 30 November 1971 for a million sales.[4]

She also wrote successful follow-ups, "Now Run And Tell That" and "Man Sized Job" which made #3 and #4 in the R&B Top Ten and also charted in the Hot 100. Her early hits were recorded at the Hi recording studios in Memphis, operated by Willie Mitchell, using the cream of southern session players. She continued to have hits on Westbound and then on ABC Records through the mid-1970s, including "Love Me Right" (#10 R&B, #80 pop) She continued to produce and perform live. Her co-penned song, "Married, But Not to Each Other" (#16 R&B) was included in the 1979 The Best of Barbara Mandrell, compilation album.

In the early 1980s, she signed as a singer and songwriter with Malaco Records, for whom she released a string of critically acclaimed albums over more than 20 years, starting with Lady in the Street (1983) and Right Place, Right Time (1984). Both albums became major successes among soul blues, R&B and soul fans and on urban radio stations. In 1985, she enjoyed her only recognition in the UK Singles Chart, when her cover version of Rockin' Sidney's, "My Toot Toot", reached #6.[5]

LaSalle appeared at the 1984 and 1993 versions of the Long Beach Blues Festival, and also in 1993, she performed at the San Francisco Blues Festival. Her album Smokin' In Bed (1997) sold well.[3] After more than a decade away, when she recorded three albums with small Memphis-based soul-blues label, Ecko, she returned to Malaco for her 2010 outing called "24 Hour Woman".

She continues to work as a live performer, particularly at festivals, and more recently has branched out into the gospel genre. In 2011, she was inducted into the Blues Hall of Fame.[6]

In 2013, LaSalle was nominated for a Blues Music Award in the 'Soul Blues Female Artist' category.[7]

This article uses material from the article Denise LaSalle from the free encyclopedia Wikipedia and it is licensed under the GNU Free Documentation License.

After You've Gone Streetrats
Update Required To play the media you will need to either update your browser to a recent version or update your Flash plugin.