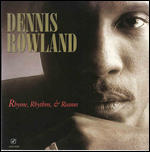 Dennis Rowland is a jazz vocalist born and raised in Detroit, MI. Having grown up in a household of jazz enthusiasts, Rowland developed an appreciation for Jazz music at an early age. At the age of five or six Rowland heard the vocals of Joe Williams of the Count Basie Orchestra, which has influenced his approach to singing ever since.[1] Rowland's voice is rich and deep, and throughout the early 1970s, Rowland worked Detroit's local jazz and acting scene. In 1977 Rowland was hired by Count Basie as a vocalist on his tours, filling the same role his idols Joe Williams and Jimmy Rushing had occupied for so many years. For Rowland, it was a dream come true and he would tour with Basie for the following seven years. During his time with Basie, Rowland had the chance to share the stage with such icons as Sarah Vaughan, Ella Fitzgerald and Tony Bennett.[2] Rowland was seen recently as Jimmy Baker in the film Real Gone Cat by film director Robert Sucato. He currently resides and performs regularly in Phoenix, Arizona.

December 19, 2012 Dennis Rowland is hospitalized at Barrow Neurological Institute in Phoenix after suffering a severe stroke.

This article uses material from the article Dennis Rowland from the free encyclopedia Wikipedia and it is licensed under the GNU Free Documentation License.