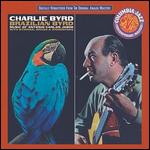 Charlie Lee Byrd (September 16, 1925 – December 2, 1999) was an American guitarist. His earliest and strongest musical influence was Django Reinhardt, the gypsy guitarist. Byrd was best known for his association with Brazilian music, especially bossa nova. In 1962, Byrd collaborated with Stan Getz on the album Jazz Samba, a recording which brought bossa nova into the mainstream of North American music.

Charlie Byrd was born in Suffolk, Virginia, in 1925 and grew up in the town of Chuckatuck, Virginia. His father, a mandolinist and guitarist, taught him how to play the acoustic steel guitar at age 10. Byrd had three brothers, Oscar, Jack, and Joe, who was a bass player. In 1942 Byrd entered the Virginia Polytechnic Institute and played in the school orchestra. In 1943 he was drafted into the United States Army for World War II, saw combat, then was stationed in Paris in 1945 where he played in an Army Special Services band and toured occupied Europe in the all-soldier production G.I. Carmen.

After the war, Byrd returned to the United States and went to New York City, where he studied composition and jazz theory at the Harnett National Music School in Manhattan, New York City. During this time he began playing a classical guitar. After moving to Washington, D.C. in 1950, he studied classical guitar with Sophocles Papas for several years. In 1954 he became a pupil of the Spanish classical guitarist Andrés Segovia and spent time studying in Italy with Segovia.

Byrd's greatest influence was the gypsy guitarist Django Reinhardt, whom he saw perform in Paris.[1][2][3]

In 1957 Byrd met double bassist Keter Betts in a Washington, D.C., club called the Vineyard. The two began doing gigs together, and by October they were frequently performing at a club called the Showboat. In 1959 the pair joined Woody Herman's band and toured Europe for three weeks as part of a State Department-sponsored goodwill tour. The other members of the band were Vince Guaraldi, Bill Harris, Nat Adderley and drummer Jimmy Campbell.[4] Byrd led his own groups that sometimes featured his brother Joe. Byrd was also active as a teacher in the late 1950s; he trained guitar students at his home in Washington, D.C., each required to audition before he agreed to be their teacher.

Byrd was introduced to Brazilian music by Felix Grant, a friend and radio host who had contacts in Brazil in the late 1950s, and who was well-known there by 1960 due to the efforts of Brazilian radio broadcaster Paulo Santos. Following a spring 1961 diplomatic tour of South America (including Brazil) for the State Department, Byrd returned home and met with Stan Getz at the Showboat Lounge. Byrd invited Getz back to his home to listen to some bossa nova recordings by João Gilberto and Antonio Carlos Jobim which he had brought back. Getz liked what he heard and the two decided that they wanted to make an album of the songs. The task of creating an authentic sound, however, proved much more challenging than either had anticipated.[5][6]

Getz convinced Creed Taylor at Verve Records to produce the album. Taylor and Byrd assembled a group of musicians they knew. These early sessions did not turn out to either man's liking, so Byrd gathered a group of musicians that had been to Brazil with him previously and practiced with them in Washington, D.C. until he felt they were ready to record. The group included his brother Gene Byrd, as well as Keter Betts, Bill Reichenbach and Buddy Deppenschmidt. Reichenbach and Deppenschmidt were drummers, and the combination made it easier to achieve samba rhythm. Finally the group was deemed ready and Getz and Taylor arrived in Washington, D.C. on February 13, 1962. They recorded in a building adjacent to All Souls Unitarian Church because of the building's excellent acoustics.[5]

Jazz Samba was released in April 1962, and by September it had entered the Billboard pop album chart. By March of the following year the album had moved to number one. The term "bossa nova" wasn't used until later. The album remained on the charts for seventy weeks, and Getz soon beat John Coltrane in a Down Beat poll. One of the album's most popular tunes was a Jobim hit, titled "Desafinado".[5]

Following the success of Jazz Samba, Byrd signed with Riverside Records, which rereleased six of his albums recorded for the small Offbeat label, a subsidiary of Washington Records.[7]

In 1963, Byrd toured Europe with Les McCann and Zoot Sims.[8] Between 1964 and 1965 he appeared at the Newport Jazz Festival with Episcopal priest Malcolm Boyd, accompanying prayers from his book Are You Running With Me Jesus? with guitar.[9] In 1967 Byrd brought a lawsuit against Stan Getz and MGM, contending that he was unfairly paid for his contributions to the 1962 album Jazz Samba. The jury agreed with Byrd and awarded him half the royalties from the album.[10]

In 1973 Byrd moved to Annapolis, Maryland, and in September of that year he recorded an album with Cal Tjader titled Tambú, the only recording the two would make together.[11] That same year Byrd joined guitarists Herb Ellis and Barney Kessel and formed the Great Guitars group, which also included drummer Johnny Rae.[11][12] Byrd collaborated with Venezuelan pianist and composer Aldemaro Romero on the album Onda Nueva/The New Wave.

From 1980 through 1996, he released several of his arrangements to the jazz and classical guitar community through Guitarist's Forum (gfmusic.com), including Charlie Byrd's Christmas Guitar Solos, Mozart: Seven Waltzes For Classical Guitar, and The Charlie Byrd Library featuring the music of George Gershwin and Irving Berlin. He also collaborated with the Annapolis Brass Quintet in the late 1980s, appearing with them in over 50 concerts across the United States and releasing two albums.

Byrd played for several years at a jazz club in Silver Spring, Maryland, called The Showboat II which was owned and managed by his manager, Peter Lambros. He was also home-based at the King of France Tavern nightclub at the Maryland Inn in Annapolis from 1973 until his death in 1999. In 1992 the book "Jazz Cooks"—by Bob Young and Al Stankus—was published by Stewart, Tabori & Chang, a compilation of recipes that include a few recipes from Byrd.[13] He also authored the 1973 publication Charlie Byrd's Melodic Method for Guitar.

On March 13, 14, 15, 16, 1963 Byrd travelled two hours south of Washington, DC to the University of Virginia in Charlottesville to provide music for an original musical, “Lament For Guitar and Two Lovers.” The play was by Lee Devin of the UVa drama department, with music for 10-piece ensemble by Sidney Hodkinsom of the UVa music department. Two night’s later on March 18, the Byrd trio played a concert at Cabell Hall, the university’s acoustic auditorium. [14]

Byrd was married to Rebecca Byrd, and has two daughters from previous marriages, Carol Rose of Charlotte, NC, and Charlotte Byrd of Crownsville, MD. He loved sailboating, and owned a twenty-six-foot boat called "I'm Hip" that he sailed to various parts of the world.

This article uses material from the article Charlie Byrd from the free encyclopedia Wikipedia and it is licensed under the GNU Free Documentation License.

O morro não tem vez Organ-X
Update Required To play the media you will need to either update your browser to a recent version or update your Flash plugin.