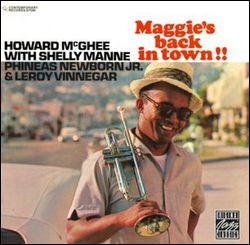 Howard McGhee (March 6, 1918 – July 17, 1987) was one of the first bebop jazz trumpeters, with Dizzy Gillespie, Fats Navarro and Idrees Sulieman. He was known for his fast fingers and very high notes. What is generally not known is the influence that he had on younger hard bop trumpeters, with Fats Navarro.

Howard McGhee was raised in Detroit, Michigan. During his career, he played in bands led by Lionel Hampton, Andy Kirk, Count Basie and Charlie Barnet. He was in a club listening to the radio when he first heard Parker and was one of the early adopters of the new style, a fact that was disapproved by older musicians like Kid Ory.

In 1946–47, some record sessions for the new label Dial were organized at Hollywood with Charlie Parker and the Howard McGhee combo. The first was held on July 29, 1946. The musicians were Charlie Parker, Howard McGhee, Jimmy Bunn , Bob Kesterson, and Roy Porter. With Parker close to a nervous breakdown, he played "Max is Making Wax", "Lover Man", and "The Gypsy".[1]

McGhee continued to work as a sideman for Parker. He played on titles like "Relaxin' at Camarillo", "Cheers", "Carvin the Bird" and "Stupendous". Around this time, McGhee "was a central figure in the Los Angeles bebop world, taking part in numerous concerts, recording, and even running a night club for a time".[1] His stay in California was cut short because of racial prejudice, particularly vicious towards McGhee as half of a mixed-race couple.[2]

Drug problems sidelined McGhee for much of the 1950s, but he resurfaced in the 1960s, appearing in many George Wein productions. His career sputtered again in the mid-1960s and he did not record again until 1976. He led one of three big jazz bands trying to succeed in New York in the late 1960s. While the band did not survive, a recording was released in the mid-1970s.

He taught music through the 1970s, both in classrooms and at his apartment in midtown Manhattan and instructed musicians like Charlie Rouse in music theory. He was as much an accomplished composer-arranger as he was a performer.

This article uses material from the article Howard McGhee from the free encyclopedia Wikipedia and it is licensed under the GNU Free Documentation License.