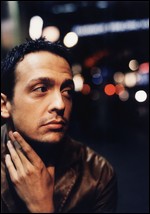 born on 6/5/1971 in Viersen, Nordrhein-Westfalen, Germany

Till Brönner (born 6 May 1971 in Viersen, West Germany) is a jazz musician, trumpeter, singer, composer, arranger and producer.[1]

Brönner was raised in Rome and received classical trumpet education at the Jesuit boarding school Aloisiuskolleg in Bonn. During high school, he completed a one-year exchange program to the United States with the organization ASSIST. He then studied jazz trumpet at the music academy in Cologne under Jiggs Whigham and Jon Eardley.

From 1989–1991, Brönner was a member of the Peter Herbolzheimer Rhythm Combination & Brass. At the age of twenty, he became solo trumpeter of the RIAS Big Band Berlin under Horst Jankowski and Jiggs Whigham.[2]

Brönner recorded his debut album, Generations of Jazz (1993) with Ray Brown and Jeff Hamilton. His vocal debut was on Love (Verve, 1998). His album That Summer (2004) landed on the German pop chart at No. 16 and made him the bestselling jazz musician in Germany's history. Larry Klein produced his next two albums. Oceana (2006) featured appearances by vocalists Carla Bruni, Madeleine Peyroux, and Luciana Souza. Rio (2009) was a tribute to bossa nova and Brazilian music with appearances by Kurt Elling, Melody Gardot, Sergio Mendes, Milton Nascimento, and Luciana Souza.[2]

Brönner wrote the score for Jazz Seen, a documentary about photographer William Claxton, and composed the soundtrack for Höllentour, a movie about the Tour de France bicycle race. In 2014, he released The Movie Album, which contained cover versions of songs from old movies to the present, recorded in Los Angeles.[2]

This article uses material from the article Till Brönner from the free encyclopedia Wikipedia and it is licensed under the GNU Free Documentation License.

Dream A Little Dream Of Me A Touch Of Swing
Update Required To play the media you will need to either update your browser to a recent version or update your Flash plugin.