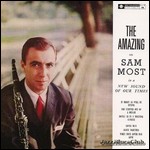 Sam Most (Samuel Most) is a Los Angeles-based jazz flautist and tenor saxophonist. Along with Frank Wess, he is one of the first jazz flautists. He was born on December 16, 1930, in Atlantic City, New Jersey. He has a brother, clarinetist, Abe Most, with whom he has performed.

Early in his career (in the 1950s) he played with Tommy Dorsey, Boyd Raeburn and Don Redman. He also did session work for Chris Connor, Paul Quinichette and Teddy Wilson. He was a member of the Buddy Rich band from 1959 to 1961. [1]

He was the subject of Edmond Goff's 2001 documentary film, "Sam Most, Jazz Flutist." He is a member of the Bahá'í Faith and has collaborated with other Bahá'í musicians as well.[2][3]

Recorded, as Sam Most (leader) with Prestige, Debut (reissued on Xanadu), Vanguard, and Bethlehem.

This article uses material from the article Sam Most from the free encyclopedia Wikipedia and it is licensed under the GNU Free Documentation License.

Shim Sham Marina & The Kats
Update Required To play the media you will need to either update your browser to a recent version or update your Flash plugin.